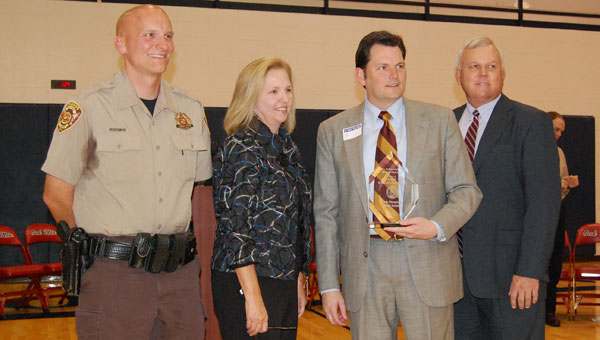 NORTH SHELBY — Pointing at the TV cameras in the back of the Oak Mountain High School gymnasium, Alabama Attorney General Troy King uttered a harsh reality of today’s society.

“If you do something wrong, you’re going to be the lead story on the news,” he said.

But King wasn’t there to harp on negatives.

Instead, King made an appearance at the North Shelby high school to present principal Joan Doyle with the 2010 Alabama Safe Schools Award of Excellence during an afternoon ceremony Nov. 1.

“Excellence is not an act, it’s a habit,” King said in his address to the gathering of students and faculty members. “We simply can’t take for granted that schools are a safe place. I hope you get the same attention (with the award) — not that something went wrong, but that something went right.”

The school, which implemented a safety plan four years ago in preparation for emergencies, has worked hard to improve its safety within the classrooms, said Doyle.

“We’ve always had a safety plan,” Doyle said. “We always run our (safety) drills, and it really has improved through some evaluation and tweaking. We’ve made it a priority.”

Doyle said being recognized by King shows how far the school has come in terms of safety.

“It’s quite an honor,” she said. “It’s a collaborative effort. All have to do their part.”

Oak Mountain student Drew Maddox, who also serves as the school’s Student Government Association president, said the award is a testament to the leaders in place.

“It’s great. I’m very happy for us,” Maddox said. “All the principals are there for us, and they make sure we are all safe. They usually come to the students first to help with issues and to make sure everything is under control.”

The school received more than just an award.

Near the end of the ceremony, state representative Mary Sue McClurkin presented the school with a $10,000 donation.

Doyle said she was thankful for the donations.

“It means everything,” Doyle said. “The improvement of our safety and our facilities has to depend on folks helping out.”

Bobby Weldon and Jewel Voncille Lucas were married on Oct. 15, 1960 in Alabaster. Mrs. Lucas is the former Jewel... read more