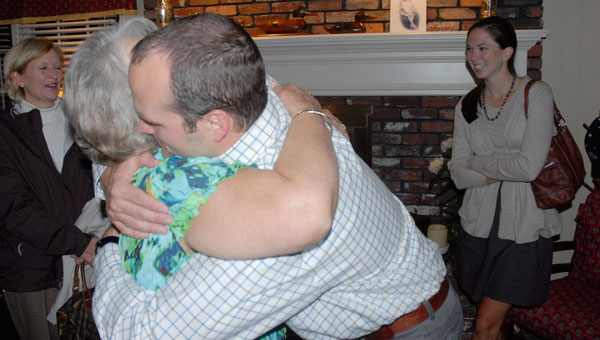 Mary Sue McClurkin embraces her son, Daniel, at her Pelham residence after she was declared the winner of the Alabama House of Representatives District 43 seat in the Nov. 2 election. (Reporter Photo/Neal Wagner)

At about 10:55 p.m. Nov. 2, Republican Alabama House of Representatives candidate Mary Sue McClurkin received the call she had been waiting on for months. When she answered the phone from the living room of her Indian Springs house, her opponent’s voice came from the other end.

“Thank you, Virginia, I really appreciate that,” McClurkin, who was re-elected to represent Alabama House District 43 during the state’s Nov. 2 election, said to her Democratic opponent Virginia Sweet after Sweet called to concede the race and congratulate her opponent on the victory.

“Thank you for running a clean campaign, and for not being hostile,” McClurkin added. “I appreciate your call, and you feel free to contact me with any issue you want to talk about.”

McClurkin, who has been serving in the state House since 1998, will continue to represent District 43, which covers much of Pelham, Helena and North Shelby.

“It just feels great. I am so excited to go back and represent the people of District 43,” she said. “This is really a happy time. I think this is the happiest I have been in a while.

“I think the people have spoken loud and clear, and I think we should listen,” McClurkin added. “Virginia asked me to work to repeal the grocery tax, and I told her I think we can do that without putting the burden on the backs of small businesses.”

With the state House balance of power shifting in favor of the Republicans during the election, McClurkin said she was excited about the upcoming legislative session. She said she will look to pass bills like ethics reform first.

“To think of some of the things we can do with a Republican majority,” McClurkin said. “We can pass things like the ethics reform bill in the House, and the Senate won’t kill everything we pass, hopefully.

McClurkin said the Republicans likely will govern differently than they did in the past during the upcoming term.

“I think it will be fairer this time. I don’t think the Republicans will govern like we did in the past,” McClurkin said. “From the past few years, we know what it’s like to be on the losing end of everything.

“It will be so nice to have a body to work with that has the same ideas as you do,” McClurkin added.

Alabama governor Dr. Robert Bentley stands with members of his family to deliver his victory speech on Nov. 2 at... read more