Most speakers say no to Pelham smoking ban during hearing 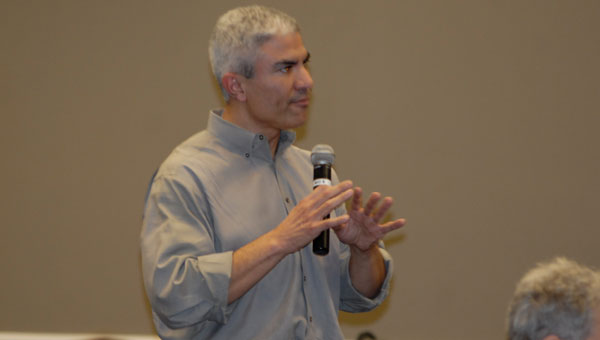 Javier Jerez, owner of Margarita Grill in Pelham, addresses the Pelham City Council during a Nov. 9 public hearing on a proposed smoking ban in the city. (Reporter Photo/Neal Wagner)

The majority of speakers during a Nov. 9 public hearing said they would be against a citywide smoking ban in public places in Pelham, and urged the Pelham City Council to carefully study the matter before deciding if it will act on the issue.

During the public hearing, which was held at the Pelham Civic Complex and drew about 25 Pelham residents and business owners, five speakers said they would oppose a smoking ban in all public places in the city, and three said they would be in favor of a ban or an ordinance limiting tobacco use in public places.

The City Council called the hearing to gather public opinion on the matter, and council members will consider everything said during the hearing as they decide if and when they will address the issue, said Pelham Mayor Don Murphy.

“(The ordinance) is really not anything at this point. We haven’t drafted anything,” Murphy added. “We just want to listen to what the citizens and business owners want to say.”

Ann Taylor, owner of Ann Taylor Barber and Styling in Pelham, said she felt a smoking ban would infringe on her personal rights.

“I think our rights are being taken away by the federal government, and it’s coming down to the cities now,” Taylor said. “My customers smoke cigarettes and cigars, and it’s my right and their right to come into my business and relax, get their hair cut and smoke a cigarette or a cigar.

“It should be left up to the individual business owner. Alabaster left it up to the business owner,” she added. “My mom smoked for years, and I was around that secondhand smoke, and I haven’t got cancer yet.”

Alabaster recently passed a smoking ordinance requiring all hotels and restaurants in its city to declare themselves either smoking or non-smoking. The business owners must also post signs at every entrance declaring their smoking status.

Clint Umphrey, manager of Texas Roadhouse off Alabama 119, said forcing Pelham businesses to declare themselves either smoking or non-smoking would hurt the city’s economy.

“If we say we are smoke-friendly, there’s a negative brand associated with that. Putting up a sign doesn’t change anything. I don’t see what good that does,” Umphrey said. “It’s different if we (restaurants) all are abiding by the same rule. That way, we can compete fairly.

“I don’t really appreciate being forced to make a choice,” Umphrey added, as he referenced an ordinance similar to Alabaster’s. “It’s giving me a choice, but it’s forcing me to post a sign.”

Javier Jerez, owner of Margarita Grill off Alabama 119, said he would like to see outdoor eating areas remain smoking-friendly, even if the city banned smoking in all indoor areas.

Pelham resident Maurice Mercer said he would be in favor of requiring Pelham businesses to post signs declaring their smoking status.

“When you have families and kids and you bring them to an environment that could be harmful, I do believe that businesses should have to post a sign so you know if it’s smoking or not,” Mercer said.

Murphy, who previously said he would be in favor of banning smoking in all public places in the city, said secondhand smoke is detrimental to those who are forced to be around it.

Murphy, who would not have a vote in the matter if it came before the City Council, said it is up to the council members to decide if they will draft a smoking ordinance in the future.

FROM STAFF REPORTS The Alabaster Police Department is working to clear a train blocking a pair of intersections near the... read more