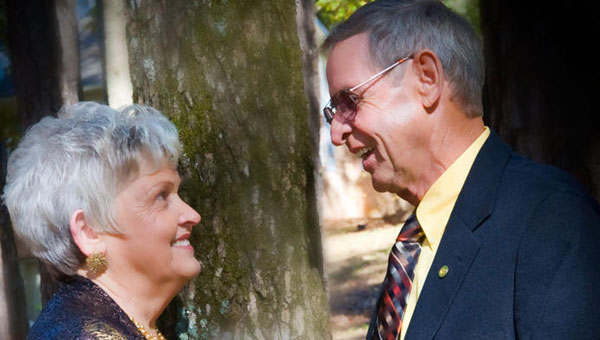 On Nov. 7, 2010, Lawrence and Linda Barnett of Maylene, celebrated their 50th wedding anniversary at the home of Mick and Valerie Springer.

Mick and Valerie Springer and Mark and Sharee Barnett gave the tea for their parents.

Lawrence and Linda Barnett have five grandchildren, Ashlee Springer, Haley, Jadey and Corey Barnett. It was a beautiful autumn day and the house was filled with love for the couple that has been an inspiration to so many in the community. There were approximately 130 in attendance to celebrate.

Lawrence and Linda Barnett share their anniversary with their daughter and son-in-law, Valerie and Mick Springer who were married 29 years on Nov. 7. They also shared the day with Linda’s mother and daddy, both deceased, Jack and Cora Holcombe who would have been married 74 years.

Resident gets Camper of the Year award

Michael Oglesby, with plaque, is flanked by the Camp ASCCA counselors who came to Alabaster to surprise him. (Reporter photo/Amy... read more