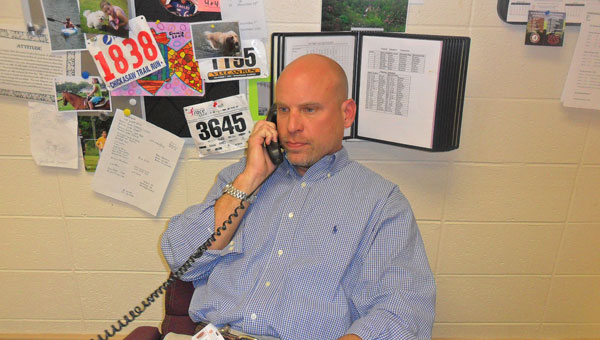 Bryan Jamison, assistant principal at Thompson Middle School, manages his home life with his school duties, and has a passion for running.

As a youngster, Thompson Middle School Assistant Principal Bryan Jamison, a Jacksonville native, would stay outside and play basketball until it was dark and his hands and feet were almost frozen. Later he was honored to play on a state championship baseball team as he lettered in both sports.

The youngest of six children, Jamison worked hard and had good role models. He knew he wanted to impact the lives of young people. His parents valued “doing the right thing” and education.

Jamison finished college at Jacksonville State University in 1996 and for the next four years he was a coach and teacher at Oxford High School in Oxford, Ala. Later he worked in the world of sales for a private computer education company, calling on schools as his customers. He was located in Oxford, Miss., and Montgomery.

Jamison received his master’s degree in education in 1999. Even though in a successful business career, teaching called to him and for the next four years he was at Holtville High teaching science.

“Shelby County empowers its teachers with professional development classes, and lots of valuable resources,” he said.

Currently as a single Dad, he “happily has his hands full,” he said. Daughter Emmie is 9 and son Jon David is 12. Jon David runs cross country while Emmie loves her dance — ballet, tap or jazz.

Running is a passion with Jamison. The Susan Komen Race for the Cure, the Vulcan Run — he does all that he has time for. Two weeks ago, he organized a 5K at our own Veterans Park. More than 75 people participated in this first “Monster Dash.”

When asked if he thinks middle school is a “critical time,” Jamison agreed that this age has so much on their minds.

They need good role models, a listening ear, open mind and lots of guidance so they can prepare for high school. He welcomes the challenge of problem solving with his students.

Bryan Jamison is a nice-looking, intelligent-speaking but down-to-earth young man. He is definitely “Type A,” just jumping to the next job at hand.

His dream trip would be an “outdoor adventure,” camping, whitewater rafting, etc. in some place like Costa Rica. His “loves” are his kids, other kids, teaching and supervising, running, hunting and fishing.

Shelby County schools really have some great employees. Get out and meet your area educators.

Curtis Rigney has been serving with the Alabaster Police Department since 1991, and has worked his way up to the... read more