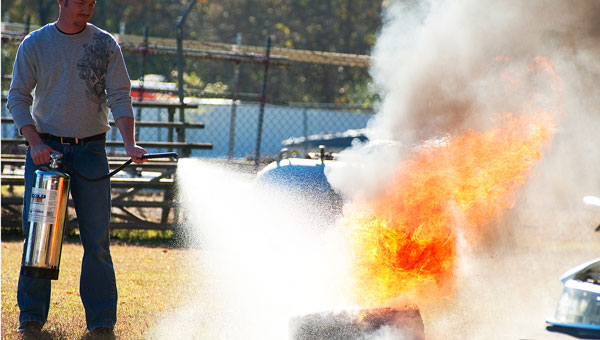 A few seconds after Cold Fire Southeast employee Justin Partridge sprayed his company’s Code 3 extinguisher onto a nearly 6,000-degree magnesium blaze, he reached down and grabbed the once white-hot material with his bare hands.

Almost immediately after using the same extinguisher on a diesel-fueled tire blaze, he was able to pick up the tire and present it to a group of Pelham firefighters gathered at the department’s training facility on Stuart Lane.

Partridge demonstrated the Pelham-based company’s Code 3 extinguisher to a pair of Pelham Fire Department engine companies, along with officers from the Mountain Brook and Gardendale police departments gathered at the Pelham training complex to test out the new multi-use extinguisher, and were impressed with the results, said Pelham Fire Department Battalion Chief Blair Sides. 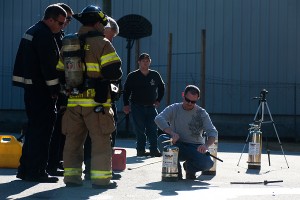 Justin Partridge does his demonstration on Nov. 17. (Reporter Photo/Jon Goering)

“We actually had a magnesium fire at one of our businesses here in Pelham about one-and-a-half years ago, and we didn’t have the proper extinguisher for it,” Sides said. “Finally, we had to hit it with a large amount of water very fast just to cool it off enough to put it out.

“That wasn’t the ideal situation, because magnesium actually uses water as a fuel source,” Sides said. “That’s why we had to douse it with a lot of water really fast. You just have to do what you can to get the temperature down.”

The Code 3 extinguisher, which is made from a plant-based material and is non-toxic, instantly cools hot surfaces and creates a “heat barrier” around anything it is sprayed on.

“If someone had this, they could spray it on someone trapped in a burning car to protect them from thermal burns before the fire department arrived on the scene,” Sides said. “Obviously, there would still be danger from smoke inhalation, but they would be protected from the heat.”

During the demonstration, Partridge sprayed the extinguisher on his bare arm and held a 1,900-degree propane torch to it for several seconds.

“I have some officers come up to me and say, ‘If I had this, I could have saved my fingers or the person in the car,” Partridge said. “If an officer just uses it to cool off a door handle long enough to open it and get the victim out, you’ve saved a life.”

“There are a lot of chemicals involved in meth labs,” Sides said. “With this being an all-purpose extinguishing agent, it would allow us to put out all types of chemical fires.”

Joyful Stitchers knit for those in need