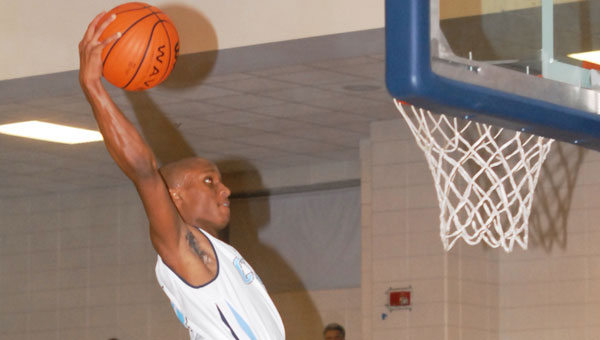 CALERA — Calera High School junior guard Deondre Haynes and his teammates learned plenty of lessons a year ago in the Eagles’ first losing season in more than a decade.

Calera capitalized on the experience with four starters returning and began writing a new chapter in the program’s storied history book with a 88-72 win over visiting Pelham in its season opener Nov. 19.

Haynes, who enters his junior season with scholarship offers from Georgia and East Carolina along with heavy interest from Alabama, led the Eagles (1-0) with 31 points on 11-of-23 shooting from the field in the victory.

Haynes, who hit 8-of-10 shots from the charity stripe including his first six attempts, said maturity is the key word for the Eagles this season.

“My maturity level has improved,” Haynes said. “The way the team played influenced me on the court.”

Haynes, who struggled with turnovers last season, kept control of the game with the ball in his hands. The 6-foot-3 point guard, who grabbed 10 rebounds and dished out eight assists, had plenty of options around him.

Alec Rash led Pelham (0-1) with 18 points in his first game with the Panthers after relocating to the school from Iowa during the summer. Rash hit 6-of-11 field goals, including 3-of-5 from beyond the arc, and grabbed eight rebounds.

After Minyard scored the game’s first basket to give the Panthers a 2-0 lead, Calera quickly took the lead and held it throughout the contest. Haynes scored 17 points in the first half as Calera jumped out to a 42-28 lead at halftime.

Pelham struggled with the Eagles’ pressure defense in the opening half, as the Panthers had 17 turnovers in the first 16 minutes. Pelham finished with 28 turnovers and was outrebounded 51-40 by the Eagles.

Haynes scored seven points in the third quarter as Calera extended its lead to 62-43 at the end of the quarter. Williams scored a basket and a free throw to cut the lead Eagles’ lead to 76-62 midway through the fourth quarter, but Pelham couldn’t cut the lead to single digits.

Calera coach Robert Burdette said he was pleased with the Eagles’ effort in their season opener. The Class 4A Eagles will face some of the top Class 6A teams in the state next week in a tournament at Vestavia Hills High School.

“We probably haven’t played that well to open the season in quite a while,” Burdette said.

Floyd, who enters his second season as the Panthers’ head coach, said facing a physical Calera team in the season opener will help prepare his squad for Class 6A, Area 10 play this season.

“This is exactly what we’re going to see when face Hoover and Thompson, so this is great preparation for our area,” Floyd said.