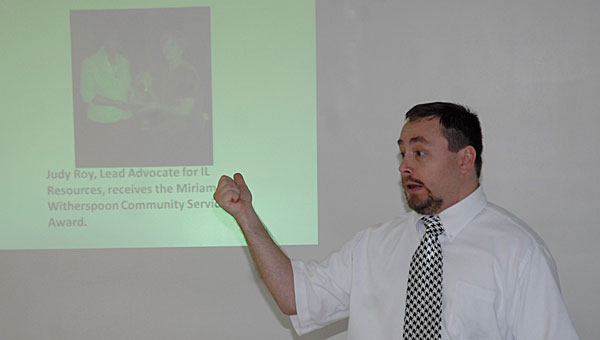 In 1972, Ed Roberts, a man facing a physical disability, enrolled in the University of California at Berkeley, unaware of the struggle ahead of him.

The first day Roberts arrived on the campus, the wheelchair-bound man quickly realized he would have difficulty accessing the buildings and attending classes.

“He was unable to attend classes, because they were not accessible to him,” said Brian Burrows, a peer advocate at the Alabaster office of Independent Living Resources of Greater Birmingham. “After months of fighting, he was able to make a difference in the community.”

Because of Roberts’ and thousands of other advocates fighting to make buildings on the other side of the country more accessible to those with disabilities, hundreds of people in Shelby and St. Clair counties are currently able to live independently despite various disabilities, Burrows said.

Through Independent Living Resources, which is a non-profit organization and consists of a single office off Plaza Circle, Burrows helps those with disabilities live independently in their homes.

“I see anyone on an independent basis that would like to live independently,” Burrows said. “They either come into my office or I go to their homes, and help them set goals for themselves.

“We are not a residential facility. There are no apartments or homes here,” Burrows added. “We promote independence. We want people to be in their homes in their communities as best as they can, because that is where they should be.”

Burrows helps those with disabilities learn about public transportation options, network with each other through a Facebook-based peer support group and learn how to overcome their disabilities and live independently.

“It is up to the individual to attain the goals they set for themselves. Our job is to create independence for them, not dependence,” Burrows said. “They create the goal, and we help them do anything from learning how to budget to understanding how to access public transportation in Shelby County.

“They want to go to the movies, go to the grocery store while still living independently,” he added. “It takes a lot of hard work for people to be able to reach that level.”

Burrows works with local schools and community leaders to help make facilities more accessible and educate people about the need for handicap-accessible buildings and utilities.

“I work with city and county leaders to make things more accessible for those with disabilities,” he said. “Transportation has been a big issue for us for years.

Working together for safety

Isaac Cruz is a rare story — a man who managed to rise above the corruption of the police in... read more