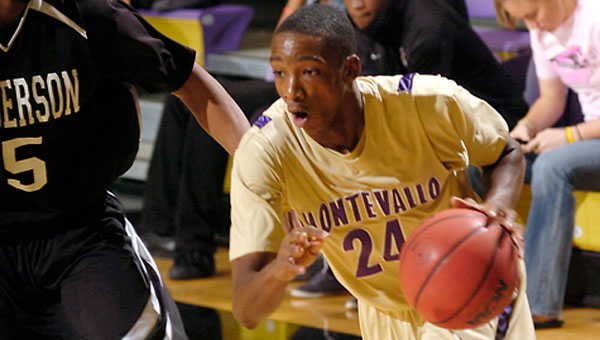 Montevallo (4-0) continued its strong start to the season as the Falcons downed North Alabama, 76-60, in its opening game of the Coca-Cola Classic Nov. 26.

The Falcons, who moved up 11 spots to No. 13 in the latest National Association of Basketball Coaches’ Division II poll, were led by their big men, as the three Montevallo forwards combined for 39 of the Falcons’ 76 points.

Senior Ronald Severtsgaard added a double-double with 10 points and 10 blocks. Junior DeMarcus Catchings chipped in nine points on 4-of-5 shooting.

Down 7-4 in the opening minutes, the Falcons went on an 11-0 run to take a 15-7 lead and never trailed from that point in the game.

The second half remained close for the first 11 minutes before Montevallo took control of the game at the 8:35 mark with a devastating 17-4 run that ended North Alabama’s chance of a comeback. The Falcons held on to a double-digit lead the rest of the way.

The Falcons outrebounded the Lions 49-35, while losing the turnover battle 22-19.

The Falcons used an explosive second half to down West Florida 67-50 in its final game of the Coca-Cola Classic Nov. 27.

Montevallo outscored the Argos 34-18 in the second half.

The Falcons were led by Catchings, who scored 14 points off the bench. Catchings hit 6-of-7 attempts from the free-throw line.

The Falcons outrebounded the Argos 43-37 and the Montevallo bench outscored the West Florida bench 34-17.

Up by three points with 6:50 to play in the opening half, the Falcons went on an 8-0 run, sparked by a pair of Coleman 3-pointers. Montevallo continued to hold a double-digit margin until the Argos went on a 9-1 run at the end the half to cut the Falcons’ lead to 33-32 entering the locker room at halftime.

The Argos were never able to capture the lead in the early part of the second half, but they did tie the game with a 3-pointer at the 17:08 mark.

The Falcons went on a 15-2 run with four different players contributing to the scoring to take back control of the game. Montevallo led the rest of the second half by double digits.

The University of Montevallo women’s basketball team used a dominating first half to down visiting Concordia College of Selma 69-35 in its home opener Nov. 23.

Junior Davia Harris led the way for the Falcons as she scored 14 points on 7-of-8 shooting from the field.

The Falcons shot 54.4 percent from the floor, while holding Concordia to just 26.8 percent shooting.

Montevallo opened the game with a 12-4 run, capped off by a jumper from Harris, in the first six minutes.

The Falcons’ went on a 21-4 run to close out the half and extend their lead to 40-15 heading into the locker room at halftime. The run was sparked by back-to-back baskets from Parrott and a 3-pointer from junior Taylor Welch.

University of Montevallo women’s basketball head coach Mechan Vanderpool announced the signing of two recruits for the 2011-2012 season during the NCAA’s early signing period in November.

Taylor Beverly and Donyeah Mayfield are the first two signees for the Falcons’ 2011-2012 class.

Beverly will join the Falcons as a forward after a strong career at Northwest Rankin High School in Brandon, Miss.

Mayfield will come to Montevallo as a forward after a stellar career at Vicksburg High School in Vicksburg, Miss.

Mayfield, who averages 15.7 points, 9.8 rebounds and 1.4 steals per game, was selected to play in the North-South All-Star Game.

Ati was named the Peach Belt Conference Freshman of the Year while leading the Falcons with 3.05 kills per set.

Ati also led the team with 0.91 blocks per set. Ati recorded double-digit kills in 25 of the Falcons’ 37 matches. Ati ranks second in the PBC in blocks, third in hitting percentage and third in kills. Ati was also named a PBC Player of the Week during the season after leading the team to three wins at the Pacer Invitational.

Garrison was named the PBC Co-Setter of the Year while leading the Falcons in assists and ranking second in digs.

Garrison currently ranks eighth in the country in assists with 11.31 per set. Garrison led the conference in assists and was ranked 10th in digs. Garrison was named PBC Specialist of the Week five times during the season.

Ati is also one of just nine freshmen in the country to be named to All-Region squads.

University of Montevallo senior January Waters capped her cross country career at the school by helping the Falcons finish in... read more