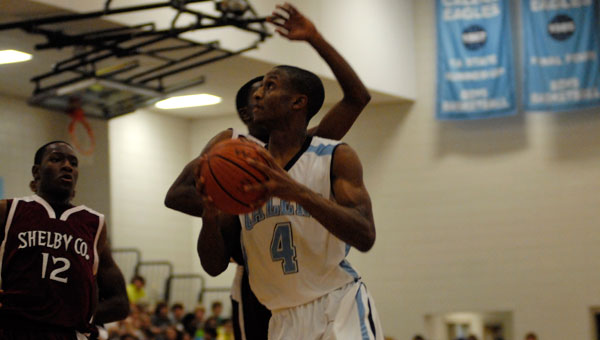 “They caught me by surprise,” Haynes said.

Haynes put on a show in front of his collegiate suitors, as he finished with a season-high 36 points to lead Calera (4-1) to a victory over its heated rival.

Haynes went on a personal 8-0 run early in the second quarter to turn a one-point deficit into a 29-22 lead. Shelby County never regained the lead.

“Titus played phenomenal,” Haynes said. “He stepped up and made some big plays for us. I’m thankful for him.”

Tyler Madison led Shelby County (2-2) with a season-high 34 points. The Wildcats missed Madison, who scored 15 points in the opening quarter, during the second quarter after he picked up three fouls in the first quarter.

Haynes scored 20 points in the first half to help the Eagles take a 40-36 lead into the locker room at halftime.

Madison’s putback cut the lead to 67-65 early in the fourth quarter before the Eagles went on a 6-0 run to seal the win.