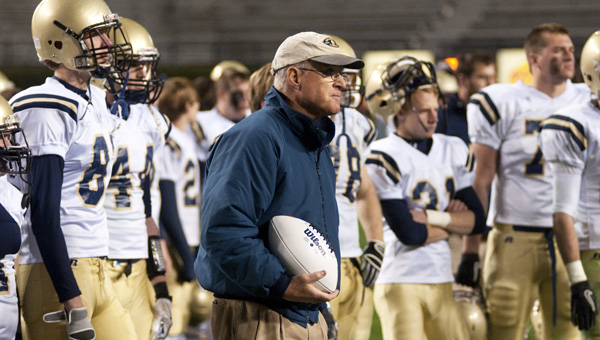 AUBURN — It may not have been Briarwood Christian School junior quarterback Ben Craft’s final game with the Lions, but it sure felt like it.

Craft and the Lions’ offense struggled with turnovers in Briarwood’s 14-0 loss to Spanish Fort in the Alabama High School Athletic Association Class 5A championship game Dec. 2 at the Super 6 at Jordan-Hare Stadium on the Auburn University campus.

The loss meant a disappointing end to the careers of Briarwood seniors. A tearful Craft felt their pain following the defeat.

“Right now I’m going to go in here and be with my brothers who are seniors,” Craft said. “It hurts just like I was a senior.” 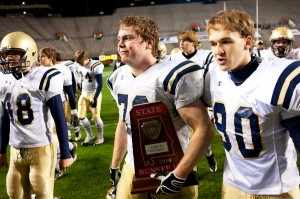 Briarwood senior Caleb Ward carries the runner-up trophy off of the field while being comforted by teammate James Bosley, right, following the Lions' loss to Spanish Fort in the 5A State Championship Game in Auburn on Dec. 2. (Reporter Photo/Jon Goering)

The Lions struggled on offense with three fumbles and two interceptions in their first seven offensive possessions. The other two Briarwood drives ended with a three-and-out and a failed fourth-down conversion.

The Lions’ two fumbles in the first half of their second Class 5A championship game in four seasons came in Spanish Fort territory, which kept Craft and his teammates from building any offensive rhythm.

“They were just momentum stoppers,” Craft said. “That’s all they were.” 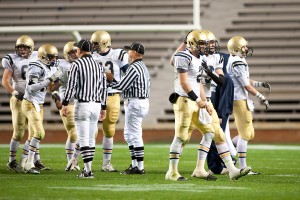 Yancey said luck wasn’t on the Lions’ side in the championship game.

“Football is a funny game,” Yancey said. “Tonight, unfortunately, it wasn’t funny for us.”

Craft ended his night 12-of-21 passing for 103 yards with two interceptions. Craft also rushed for 37 yards on eight carries.

William Byers led the Lions’ defense, which limited the Toros to only two touchdowns on seven drives that reached Briarwood territory. Byers registered 15 tackles in the loss. 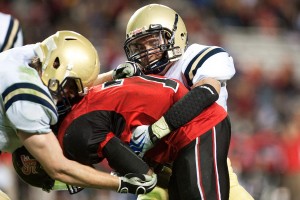 Briarwood's William Byers teams up with a teammate to bring down Spanish Fort's Ameriol Finley during the second half of the championship game. (Reporter Photo/Jon Goering)

Chad Davis finished with 11 tackles, including two tackles for a loss.

Briarwood struggled to contain Spanish Fort’s Ameriol Finley and Davares Ambrose, who accounted for 248 of the Toros’ 293 total yards on offense.

Finley rushed for 174 yards and two touchdowns on 37 carries. Ambrose rushed for 41 yards on 14 attempts. 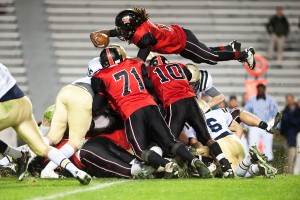 Spanish Fort's Ameriol Finley jumps over the pile on a fourth-down-and-one play deep in Briarwood territory during the championship game. (Reporter Photo/Jon Goering)

The Lions didn’t have any trouble moving the ball against the Toros in the first half, but all three Briarwood drives ended with a turnover in Spanish Fort territory.

Spanish Fort capitalized on the turnover and responded with an eight-play, 54-yard drive, caped by a 9-yard touchdown run by Finley. Bobby Creighton’s point-after attempt gave the Toros a 7-0 lead with 6:20 remaining in the opening quarter.

The Lions’ second drive covered 51 yards before ending with a fumble by Cunningham at the Spanish Fort 14-yard line.

Briarwood junior defensive back Devin Bowman nearly picked off a Finley pass two plays later. Later in the Toros’ possession, a pass interference call on Bowman kept the drive alive, but Creighton missed a 30-yard field goal attempt to keep the score at 7-0. 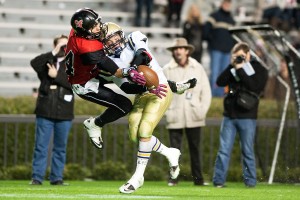 Briarwood defensive back Devin Bowman breaks up a pass intended for Spanish Fort's Adam Adcock on a long third down pass in the first half. Bowman was whistled for pass interference on the play. (Reporter Photo/Jon Goering)

Briarwood drove 50 yards on its third and final possession of the first half before the drive ended with Craft being sacked at the Toros’ 34-yard line on fourth down for a turnover on downs.

Spanish Fort carried a 7-0 lead into the locker room at halftime.

Turnovers continued to plague Briarwood in the third quarter, as Craft fumbled following an 11-yard run to give the Toros the ball at the Lions’ 31-yard line.

Finley fumbled the ball three plays later, but the Lions couldn’t take advantage of the turnover. Briarwood was forced to punt the ball after a three-and-out on its ensuing drive. 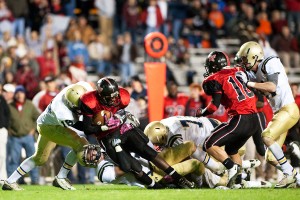 On the first play of the fourth quarter, Spanish Fort faced a fourth-and-1 at the Lions’ 6-yard line. Finley leaped over a pile at the line of scrimmage for a first down and scored on a 3-yard touchdown run two plays later. Creighton’s extra point pushed the Spanish Fort lead to 14-0 with 10:42 left in the game.

Craft’s interception ended the Lions’ first drive of the fourth quarter in Spanish Fort territory, which was Briarwood’s final push to get back in the game.

Yancey praised his defensive unit, which played without three injured starters for a majority of the season. Davis said the players didn’t let the adversity affect them. 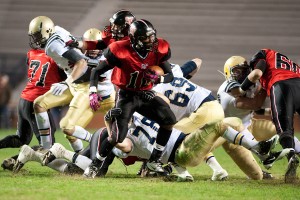 Briarwood defensive lineman Caleb Ward tries to take down Spanish Fort running back Davares Ambrose during the first half of the game. (Reporter Photo/Jon Goering)

“The injuries set in and it was discouraging,” Davis said. “What I love about these guys is we didn’t quit. We persevered.”

“We’re going to take it as fuel for next season,” Craft said.