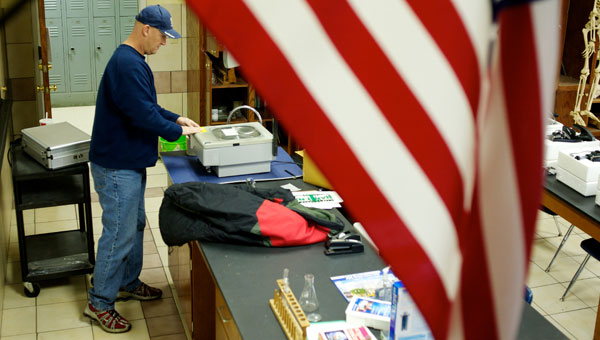 Auctioneer Chip Pearce places a tag on a piece of equipment in the science lab of Shelby Academy on Dec. 8. (Reporter Photo/Jon Goering)

Walking through the doors of the former Shelby Academy campus off Shelby County 22 in Montevallo is not unlike entering any other school in the county.

Desks remain organized into straight rows, books line the shelves in the library and the bleachers in the gym are still ready for spectators.

“It’s like they got out of school yesterday and locked the doors,” said Chip Pearce, an auctioneer and broker for the Alabaster-based Chip Pearce and Associates. “Everything in here is stuff they would have used every day.”

The last academic class held at Shelby Academy was in May 2009.

Pearce has been working with the school for the past few months preparing to auction off everything remaining in the school in an attempt to help pay off the school’s debts. Shelby Academy’s creditors recently gave Pearce the go-ahead to proceed with the auction.

“We are auctioning everything that is not physically tied down,” said Pearce, who was working to inventory everything in the school Dec. 6. “It’s crazy. I’m going to leave a vacant building from wall to wall.

“In my 30-year career, this is the first time I have liquidated an entire school,” Pearce added. “Nothing has been moved around or shifted since the last day of class.”

The school shut down before the fall 2009 semester, citing financial trouble. Despite repeated attempts to raise enough money to re-open the school, school officials recently made the decision to liquidate the building’s contents.

“We are auctioning off everything in the gym, the desks, everything in the library, books, bleachers and everything,” Pearce said, noting the building and surrounding land soon could be up for sale. “Once it’s empty, it will be a perfect spot for another private school or a church. It’s a rare opportunity.”

From Dec. 6-8, Pearce will be taking inventory of everything in the building in preparation for his online auction site, Soldalabama.com.

The auction will run from Dec. 8-15, and everything in the school will be listed on the site.

“This Saturday, the school board will open up the school for former students to take things like a football jersey or a photo that means a lot to them,” he said. “The online auction also makes it easy for alumni to buy things from the school.

“It’s been a school for 30 years, and thousands of students and hundreds of teachers have come through over the years,” Pearce added. “We are auctioning small desks, a volleyball net, six sets of bleachers, even the baseball batting nets. We are selling everything.”