Nancy Drakos is a friend for life 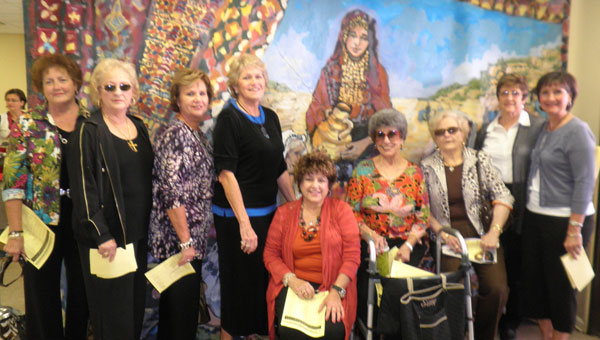 Drakos, the daughter of a Greek immigrant, grew up in Tarpon Springs, Fla., where her family worked in the sponge business. They moved to Gary, Ind., after the devastating Red Tide killed the Gulf sponges and began work in the restaurant business.

There, young Nancy was introduced to Angelo Drakos by relatives.

“It was very Greek,” said Drakos of her courtship and wedding.

The Drakos had four children: Dino, Kiki, George and Andria. The restaurant business brought the family to Birmingham.

Left a widow with four children, an opportunity came in 1986 to buy the Country Cupboard restaurant in Columbiana, which her son Dino encouraged her to do. The new business and town welcomed her, and the House of Plenty was born.

Drakos moved into her new home on Ferry Road behind the restaurant and began a new chapter in the life.

Drakos met Donna Morris, who invited her to join the Vignette Club. The Vignettes became close friends, and she has been an active, invaluable member, especially with the “Have a Heart for the Arts” fashion show and luncheon fundraiser for the Shelby County Arts Council, sponsored by the Culture, Novella, and Vignette clubs. Drakos has provided the delicious food and coordinated the adult fashions for several years.

“You become accountable to your friends,” said Drakos.

The years 1991 and 1992 were traumatic for Drakos. She was diagnosed with breast cancer and her restaurant burned to the ground. Drakos moved to Pelham to be closer to her family and her new business, the Fish Market in Hoover.

Although she moved, part of her heart and friends remain in Columbiana. For her recent birthday, she gave herself a birthday party for her Columbiana friends. Drakos wanted them to experience a traditional Greek lunch. Eight friends had lunch at the St. George’s Middle Eastern Food Festival, a Melkite church similar in traditions to her Greek orthodox church.

A birthday party for your friends – that’s Nancy Drakos, a friend for life.

Phoebe Donald Robinson can be reached by e-mail at phoeberobinson@bellsouth.net.

These young men are on a mission

Elder Clawson, Left, and Elder Burdette help decorate for Christmas as part of their mission work. For the last few... read more