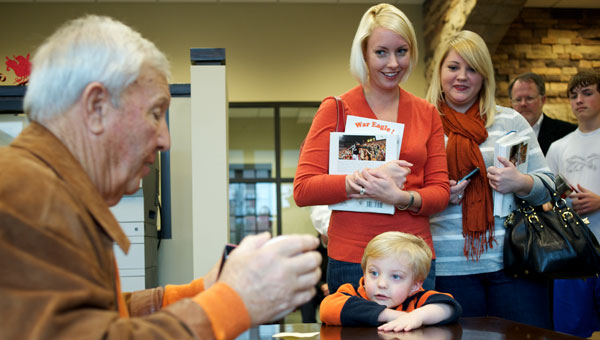 William Joiner, 3, Alabaster, watches as former Auburn football coach Pat Dye looks over the football he brought to have him sign while his mother, Candy Joiner, and aunt, Jennie Duvall, watch during a signing at Alliant Bank in Alabaster on Dec. 21. (Reporter Photo/Jon Goering)

Auburn Tiger fans replaced the usually brown stone interior of Alabaster’s Aliant Bank with a sea of orange and blue Dec. 21, as one of the school’s winningest coaches made a pre-Christmas stop at the Colonial Promenade.

Former Auburn football coach Pat Dye spent the afternoon signing portraits, footballs, hats and copies of his books “What it means to be a Tiger,” and “War Eagle!”

About 20 orange-and-blue-clad fans greeted Dye with “War Eagle” as he entered the room wearing a bright orange sweater.

“He called us last week, and said he wanted to do something to give back to the community and have a little fun,” said Aliant Bank Vice President of Marketing Dianne All. “The timing was perfect, because of Auburn’s perfect season.

“We wanted to make sure he came to Alabaster, because it is one of our growing markets,” All added.

Many fans at the event stocked up on signed copies of Dye’s books, along with other Auburn items, to give their loved ones on Christmas morning.

Dye’s Alabaster stop came after an appearance at the Gardendale Aliant Bank and a lunch sponsored by Crane Works in Birmingham, during which radio personality Paul Finebaum also spoke.

“Finebaum got up and talked, but I got the microphone from him and didn’t let him talk much,” Dye said with a laugh.

During the stop, Dye spoke of his decades of service to Auburn University, and praised the school’s current head football coach, Gene Chizik.

“It’s been a labor of love (working with the school),” Dye said. “I’m just trying to give back for what Auburn has done for me.

“I am excited about our coach. He is a good man,” Dye added. “Gene stands for alright things.”

The coach also spoke highly of the Tigers’ perfect 2010 season, and said he has already made plans to attend the national championship game Jan. 10 in Glendale, Ariz.

“This season has been fantastic. We’ve had a great year,” he said. “We won all the close games, and that’s what you’ve got to do to win a championship.

“It’s hard to win the SEC, much less the national championship,” added Dye, who coached the Tigers from 1981-1992.

Dye called the 2010 Auburn team “special,” and said the players have demonstrated much selflessness.

“Anytime you have a championship-caliber team, you’ve got something special. That is a selfless bunch of guys,” Dye said. “A lot goes into it besides just talent and ability.”