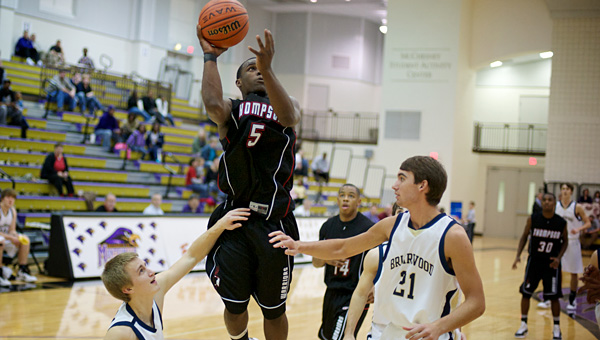 Thompson's Demarcus Threatt (5) goes up for a shot in a crowd of Briarwood defenders during the championship game on Dec. 21. (Reporter Photo/Jon Goering)

The Warriors have check-marked two team goals, according to coach Patrick Davis.

Thompson won its first tournament championship of the season over Thanksgiving at Chelsea.

The Warriors won their second tournament title of the year following a 42-37 win over Briarwood Christian in the Shelby County tournament championship game Dec. 21 at BankTrust Arena on the University of Montevallo campus. 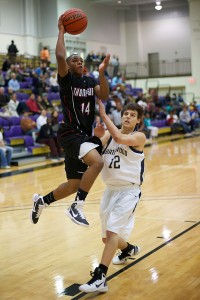 Thompson's Ryan Coleman (14) flies in for a shot over Briarwood's Jason Laatsch (12) during the game Dec. 21. (Reporter Photo/Jon Goering)

Jaylon Jones led Thompson (10-5) with 15 points in the championship game. 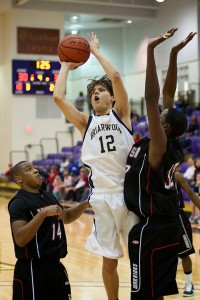 Briarwood's Jason Laatsch goes up for a shot between a pair of Thompson defenders. (Reporter Photo/Jon Goering)

The Warriors and the Lions traded the lead a couple of times in the opening half before Palmer scored on an offensive putback to give Briarwood a 17-14 lead heading into the locker room at halftime.

Smith gave the Lions their final lead at 23-22 following a layup late in the third quarter.

Jones responded with back-to-back layups and a free throw to push the Thompson lead to 27-23 before the quarter ended.

Jones coverted a four-point play following a 3-pointer and a free throw to start the fourth quarter to give the Warriors a comfortable lead.

Bowman cut the lead to 34-30 following a 3-pointer midway through the fourth quarter, but the Warriors hit just enough shots at the foul line to keep the Lions from getting back into the game.

Briarwood coach Chris Laatsch said the Warriors’ full-court pressure kept his team from being able to get in a groove in the second half.

“They disrupted us some on offense,” Laatsch said. “Their pressure made us miss some easy shots.”

Davis said winning the Shelby County tournament is a source of pride for his squad.

“It’s special,” Davis said. “We felt like there wasn’t much difference from top-to-bottom.”