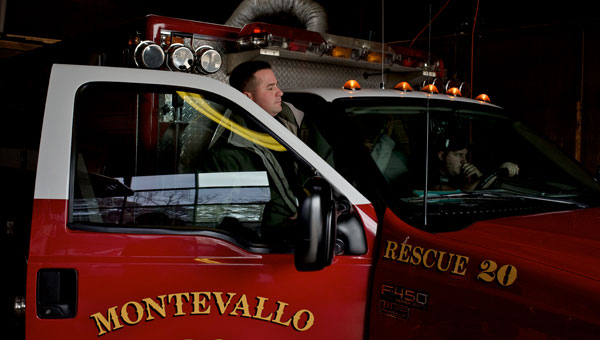 Mike Reid, a firefighter with the Pelham Fire Department and the Fire Marshal in Montevallo, hops into the truck at Montevallo's Fire Station No. 1 to respond to a suicide attempt call on Dec. 30. (Reporter Photo/Jon Goering)

When Dennis Agnew is traveling to his job with the Hoover Fire Department, he knows there’s always a chance he’ll have to take an unexpected detour.

Agnew is also the fire chief with the Saginaw Fire Department, a volunteer department. There have been days he’s had to respond to a call from Saginaw while traveling to and from his job or running errands, he said.

“Even though it’s a volunteer (department), it’s still a job,” Agnew said.

Agnew serves as chief over 12 active volunteers, all of whom come from divergent backgrounds. Two are professional firefighters, while the rest are salesmen, paramedics and phone company representatives, among other occupations.

“That’s what you’re going to find at most fire departments. People come from all different walks of life,” Agnew said.

He said community support – through both money and time – is the most important factor in the success of a volunteer fire department. The Saginaw department sends invoices of $150 per year to houses in its coverage area, but citizens can elect not to pay.

“A volunteer fire department cannot make it without the support of the community,” Agnew said. “We depend very highly on contributions. We have a fair amount of folks that do pay every year, and some that don’t. We don’t refuse service to anyone.” 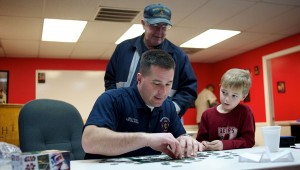 Montevallo Fire Chief Bill Reid looks over the shoulder of son Mike Reid, a captain at the Pelham Fire Department and the Fire Marshall for Montevallo, and his grandson, Tyler, while the two pass the time between calls putting together a puzzle. (Reporter Photo/Jon Goering)

Because donations are voluntary, Saginaw operates without a budget, simply paying bills after donations come in. However, firefighting doesn’t come cheap, even without salaries to pay.

“To outfit a firefighter, without air packs, costs about $1,500,” Agnew said.

Dennis Brasher, fire chief of the Vandiver Fire Department, understands how money concerns can come between a volunteer fire department and members of the community.

Before the formation of the fire district, fewer than 300 Vandiver area residents had been paying the voluntary $50 dues to support the department. Although the district’s formation passed by a healthy margin, many openly campaigned against the district.

Now that the district is a reality, the Vandiver Fire Department will finally have a budget. The department has never had a budget before, but one is coming now that dues are mandatory.

“It’ll be tremendous,” he said. “It’s going to help us do more training and buy more equipment. It may take a couple of years, but it’ll get better.”

“We already see a difference at our meetings,” she said. “It used to be just the board, and now the (citizens) are turning out.

“Now that they’re paying, they want to see where the money’s going and how it’s spent,” Brasher added.

When Montevallo Fire Department Chief Bill Reid thinks about the plight of other volunteer fire departments, he breathes a sigh of relief. 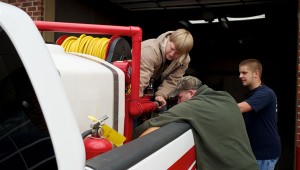 Montevallo Fire Department volunteers Brandon Broadhead, left, Wesley Lash, center, and Garren Callahan perform regular maintenance on a truck at the Montevallo station on Dec. 30. Broadhead and Lash are both paid firefighters who got their start in Montevallo's Explorer program, and Callahan is a current member of the Explorers program. (Reporter Photo/Jon Goering)

“We are very fortunate as a volunteer department because we are funded by the city. The others, they struggle,” Reid said. “It’s hard to get volunteers because they want to volunteer to fight fire and help their community, and they spend half their time raising money.”

“When you start talking paid, you’re talking around $1 million,” Reid said. “We get equipment because they don’t have to pay salaries.”

Because volunteering is so time-consuming, Agnew said it takes a special person to be an unpaid firefighter. He recounted how the Saginaw Fire Department got a call at 6:15 a.m. on Christmas Eve.

“You’re not getting paid and can be called anytime day or night,” he said. “It’s a calling. I do it for a living, but before I did that, I was a volunteer. It’s not for everybody. We’ve had folks who come and realize it’s not what they want to do.”

“I’m not bragging — there’s never a call that somebody will not be on that call,” she said.

However, serving a tight-knit community can have special hazards.

“Nine times out of 10, when you get a call here, it’s somebody you know or you know their family,” Sweezey said. “I listen to the radio and the first thing I think when I hear the ambulance is, ‘Is that my family member?’”

Reid said many volunteer firefighters enter the profession to follow a family tradition, serve their community or start training for a career in paid firefighting.

However, Reid said his 40-year career in volunteer firefighting started in a different way.

“I actually started (while I was at) the University of Montevallo for lack of something to do,” he said, laughing. “It’s just a hobby, I guess.”

He said members of the community don’t always understand the difference between paid firefighters and volunteer firefighters.

“The big difference is the time it takes us to respond to a call. If this is your profession 24 hours a day, you’ll get out there a lot quicker,” he said. “Sometimes people call 911 at 3 in the morning, they don’t understand we’re in bed too, and we’ve got to get up and get out there.”

Joey Isbell with the Vandiver Fire Department said he suffered from the same misunderstandings before he became a volunteer firefighter. However, everything changed when he was on the other side of the fire.

University of Montevallo senior Cecil Coleman recorded a double-double with 12 points and 13 rebounds in the Falcons' 73-66 loss... read more