Alabama hockey No. 3 in South 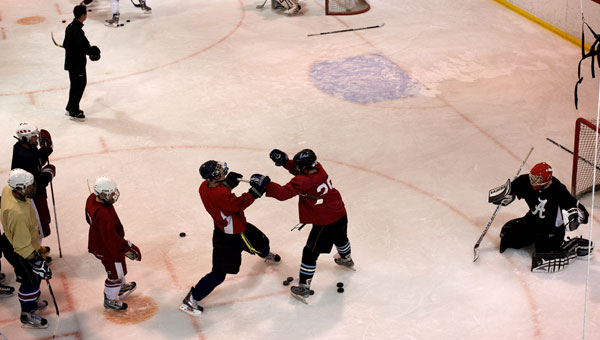 A tough schedule mixed with a winning record has propelled the Pelham-based University of Alabama hockey team near the top of a southern region poll, and has placed the team in a good position to play in a national tournament, according to Assistant Coach Ian Hebert.

The team, which competes in Division III of the American Collegiate Hockey Association, posted a No. 3 ranking in the ACHA’s latest South Region, which includes 15 teams.

Alabama is tied with Arkansas, and is behind only Florida Gulf Coast and the University of Central Florida.

If the Alabama hockey team, which has 11 regular-season games left, holds onto its ranking, it will compete in the South Regional Tournament in South Carolina in February.

“We are in a good spot to go to the South Regional,” Hebert said, noting the teams ranked fourth-10th in the South Region compete in the tournament. “The top two teams in that tournament get invited to the National Tournament in Michigan.

“But we have to take care of business the rest of the season,” he added. “Luckily, we played most of our really difficult opponents in the first half of the season.”

The Frozen Tide, which plays its home games at the Pelham Civic Complex, posted a 10-6 record in its first 16 games, beating traditionally strong teams like the University of South Florida, Kennesaw State and Tennessee.

“We went down and played Kennesaw State in September, and we beat them,” Hebert said. “That was huge for us, because they are a Division II team.”

Although the team suffered six losses in the first half of the season, the defeats may have somewhat helped the team attain its No. 3 ranking, Hebert said.

“Just like in football, you get to choose which out-of-conference teams are on your schedule,” he said. “I think we had too much of an easy schedule last year. So this year, we said ‘we are going to play against the best in the Southeast.’

“We did start out the season 0-3, but we played Central Florida and Florida Gulf Coast, which were number one and number two last year,” Hebert added. “We lost those games, but we were in every one of them.”

The top two teams in the ACHA South Region poll at the end of the season automatically receive invitations to play in the national tournament, but Hebert said it is unlikely the Tide will jump Florida Gulf Coast and UCF in the standings.

“It will be very difficult for us to jump those two teams,” Hebert said. “But we still play Auburn, LSU and Ole Miss, and all of those games are definitely winnable for us.”

With the Frozen Tide set to play the school’s biggest sports rival at the Pelham Civic Complex Jan. 14-16, Hebert said he and his team are taking nothing for granted.

“We have looked at the opponents they’ve played and we’ve looked at their record, and they are in the same position we were in when we started five or six years ago,” Hebert said of the Auburn University hockey team, which began playing this year.

“They may even be a little bit ahead of where we were at that time,” Hebert said. “We are expecting 3,000 people to come to that game. I know there are buses of Alabama students coming over from Tuscaloosa.”

Hebert, who played for the former Birmingham Bulls hockey team and now lives in Helena, praised the Frozen Tide’s home venue, and said he was glad every SEC team now has a hockey team.

“Sometimes I will say something about our hockey team, and people will say ‘Alabama has a hockey team? Where do you play?” he said. “We really have a great ice facility in Pelham.”