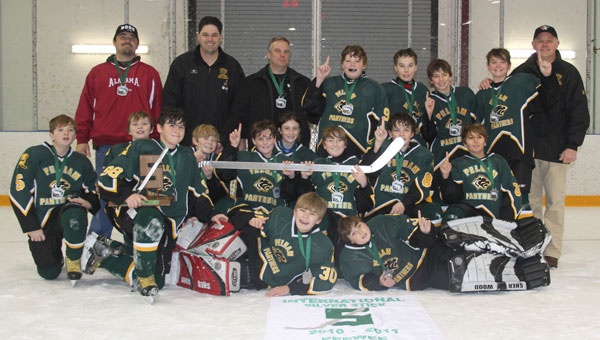 A group of Pelham hockey players recently became the first southern team ever to record a victory in one of the biggest international pee wee youth hockey tournaments in Canada.

The Pelham pee wee travel hockey team, which is composed of 12- and 13-year-olds from Pelham, Alabaster, Helena and other local cities, downed the Ancaster Avalanche of Ontario, Canada 2-1 Jan. 9 to win their division of the International Silver Sticks tournament in Pelham, Ontario.

The team attended the tournament from Jan. 5-9, and was one of the biggest trips the team has ever taken, said Alabaster resident Becky Norton, whose son, Caleb, is on the team.

In pool play during the four-day tournament, the Panthers lost 1-2 to the Ancaster Avalanche, but won two other pool play games against opposition from traditionally hockey-friendly areas.

“They played teams out of Canada, Michigan, New York, places like that,” Norton said.

In the tournament quarterfinals, Pelham defeated Scarsdale, N.Y. 5-1, and then moved on to defeat semifinal opponent Burlington, Ontario 2-1 in overtime.

The semifinal victory set up a rematch with Ancaster, which the Panthers won 2-1 on a short-handed goal in overtime.

Because of the victory, the Pelham Panthers will have their names displayed at the Hockey Hall of Fame and Museum in downtown Toronto, Canada.

“It was absolutely wonderful. The kids were so excited,” Norton said. “It’s a really big deal, because Canada is the dream for every hockey player.

“It was just wonderful,” she added.

Even though many associate hockey with northern states and Canada, Pelham is making a name for itself in the hockey world, Norton said.

“Caleb has been skating six years now,” Norton said. “We are from here, but we went to Colorado one year and Caleb wanted to ice skate.

“He wasn’t big into football or baseball, but he was just a natural skater,” she added.

After returning home to Pelham, the Nortons found a hockey haven in the Pelham Youth Hockey League, she said.

“Pelham has a great program for kids. There have been a lot of good hockey players come through here,” Norton said. “It’s Pelham’s best-kept secret. There is a lot better hockey talent here than people realize.”