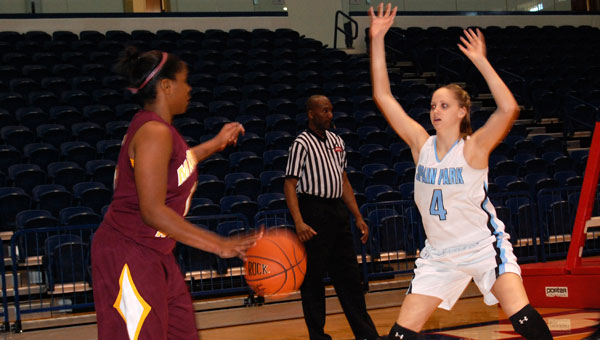 HOMEWOOD — Members of the Spain Park High School girls’ basketball team may have been given the day off from schoolwork, but the Jaguars still faced a big test Jan. 17 on the Martin Luther King, Jr. holiday.

Spain Park met Madison Academy, one of the top-ranked high school basketball squads in the nation, in the MLK Classic at the Pete Hanna Center on the Samford University campus.

The athletic Mustangs jumped out to an early lead and led throughout the contest to hand the Jaguars a 48-27 loss.

Whitney Gulledge led Spain Park (14-10) with eight points, including six points in the opening half.

Madison Academy opened the contest with a 17-2 run. Meanwhile, the Jaguars could only muster two baskets in the first quarter and trailed by 12 points after the opening period.

Gulledge and Boswell contributed a 3-pointer each in the second quarter for the Jaguars’ only baskets in the period, as the Mustangs headed into the locker room at halftime with a 28-11 lead.

Madison Academy led by as many as 26 points in the second half. Moore scored on an offensive rebound and Williams nailed a 3-pointer late in the fourth quarter to cut the final margin of defeat to 21 points.

Amber Cardwell led the Bulldogs (7-7 overall, 1-3 in Class 3A, Area 7) with 25 points. Cardwell also grabbed a team-high 12 rebounds to finish with a double-double.

Gillespie also finished with seven steals in the victory.

The Montevallo High School boys’ basketball team fell on the road at Northside 47-27 in a Class 3A, Area 7 contest.

Daniel Fillingim led the Lions (13-8) with 22 points. Fillingim added a team-high 18 rebounds to finish with a double-double.

Sam Bullard led the Rebels (6-10) with 19 points. Bullard also grabbed a team-high 10 rebounds to finish with a double-double.

Pete Thomason led the Eagles (8-7) with 17 points. Thomason also grabbed a team-high 10 rebounds to finish with a double-double.

Hawks swoop down on Heat in youth basketball action

FROM STAFF REPORTS DIVISION 2 (BOYS) The Hawks swooped the Heat for a 19 to 16 victory. The Hawks were... read more