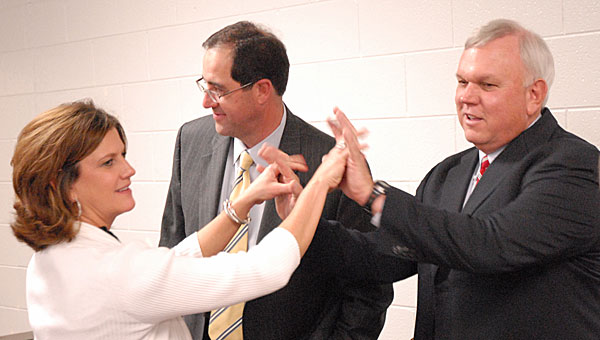 Shelby County citizens voted to renew 30 mills in school taxes for the next 30 years in a special election Feb. 8. Election results announced a little after 9 p.m. revealed voters chose to renew the 30 mills by about 2-to-1.

Members of the Shelby County School Board and school district officials erupted into cheers and applause at the county’s Instructional Services Center in Alabaster as numbers from the day’s property tax renewal election rolled in.

About 30 school officials gathered at the Instructional Services Center as they watched live election updates from ShelbyCountyReporter.com projected onto a large screen.

The atmosphere at the gathering was quiet and tense as the initial election results came in, but laughter and conversation filled the room as it became clear Shelby County voters were in favor of extending the county’s current 30 mills of property tax until 2041.

“We are just so excited as a school system for our children,” said Superintendent Randy Fuller. “We aren’t increasing the taxes. We are just continuing them.

“We still care about our kids. That was the only reason behind this election,” Fuller added. “We are going to do what we said we were going to do.”

If the tax extension had failed, the county’s current 30 mills of property tax would have expired in six years.

Before the issue passed, financial companies would not issue bonds to the school system because they were unsure if the system would be able to honor its obligations in the future, Fuller said.

But because the taxes will remain in place for 30 more years, the school district will be able to begin looking at new facilities in several of the county’s cities.

“We will get to support new bonds and restructure our debt. This will fund new schools in our growth areas,” Fuller said, noting Calera, Chelsea, Helena and Alabaster have been identified as the county’s fastest growing school areas.

“The County Commission has to approve the election at its next meeting, and then we can get started (looking at new schools),” Fuller added. “This is still a two-to-five year process, but now we have the resources to do it.”

He said in addition to capital projects, the property tax also will help the school district fund support programs such as English as a second language, professional development for the teachers and student support programs, Fuller said.

Fuller also said the money will help the district provide funding for arts programs and cover the schools’ utility and maintenance costs.

Shelby County Middle School Coordinator Lewis Brooks said the passage of the tax was “exciting,” and said the election would allow the school system to continue to offer its programs for many years.

“For us, it means the opportunity to continue the great programs we offer as a district,” Brooks said. “It’s exciting to be able to address the needs we have based on our growth.

“I’m really proud of how we pulled together as a district and made it a positive campaign. It’s all about the kids,” Brooks said. “I’m proud of our superintendent. He’s a great visionary.”