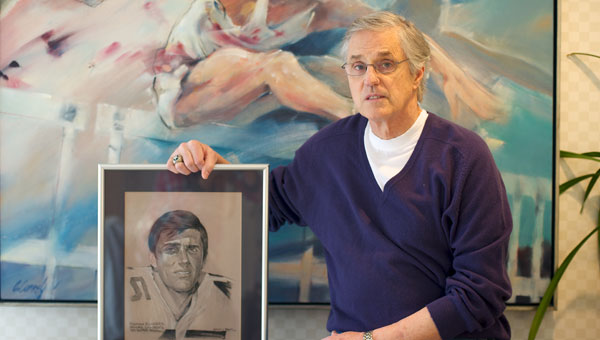 When Pelham resident Richmond Flowers saw the football leave the ground and split the uprights shortly before time expired in the fifth Super Bowl, it was a feeling he will never forget.

Flowers’ team, the Dallas Cowboys, had been leading the Baltimore Colts the entire game, but a successful field goal with five seconds left changed the outcome of the biggest football contest of his life.

“We lost on the last play of the game on what was a pretty crummy call,” Flowers said. “I remember seeing it go through the uprights and thinking ‘Man, I just lost $15,000.’”

Though the Cowboys were 2 1/2 point underdogs in the 1971 Super Bowl, they led or were tied with the Colts nearly the entire game.

With the game tied at 13-all with about two minutes left in the contest, the Cowboys began a drive on Baltimore’s 48-yard line, but a holding penalty two plays later pushed Dallas back to its own 27-yard line.

On the next play, Dallas quarterback Craig Morton threw an interception to Colts linebacker Mike Curtis, who returned the ball to the Cowboys’ 28-yard line and set up the game-winning field goal by rookie kicker Jim O’Brien.

The field goal secured a 16-13 victory for the Colts in a game plagued with the highest number of combined turnovers in Super Bowl history.

“I remember we really had it going our way the whole game,” Flowers said. “And then it went through the uprights on the last play of the game.”

Flowers, who was a defensive back for the Cowboys during Super Bowl V, said the game likely would have turned out differently if the Colts’ starting quarterback, Johnny Unitas, hadn’t left the game in the second quarter with an injury.

“Their starting quarterback got knocked out of the game early. We had his number all day,” Flowers said. “If (Colts backup quarterback Earl Morrall) hadn’t come in, we probably would have won that game anyway.”

Despite the loss, Flowers said he is filled with pride every time he watches a Super Bowl on television. Although the pageantry surrounding the big game has changed over the years, the feelings the players experience has not, he said.

“Of course, I didn’t get to see the halftime show when I was there because we were in the locker room,” Flowers said. “I think there is a lot more pageantry today. But as far as the players today, I’m sure it’s the same for them as it was back then.

“I remember the pressure I felt from going out on that field and knowing that was the highest level of competition the NFL offers,” Flowers added.

Flowers also said the speed and intensity of the game and the size of the players has changed drastically since his gridiron days.

“The players today are certainly much bigger and much faster than we were,” he said. “When you’ve got a 6-6 running back who runs a 4.4 (second) 40 (yard dash), you realize your body is not built to tackle a guy like that. That’s like trying to tackle a car.”

Flowers, who has lived in Pelham for many years, speaks proudly of his role in the 1971 Super Bowl, and said he is part of an exclusive club of NFL alumni.

“When I look today and see that a billion people watched the Super Bowl, it makes me proud because I was a part of that at one time,” Flowers added.