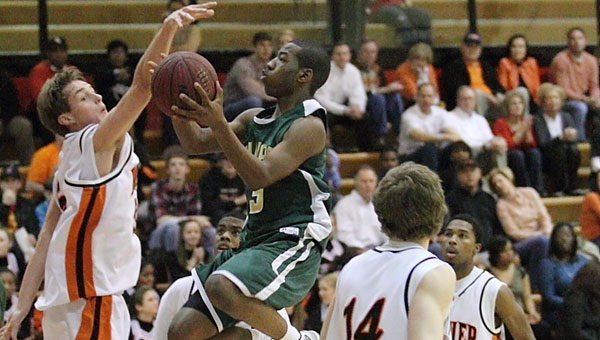 The Panthers took the court three days later against Hoover in the Class 6A, Area 10 tournament championship game Feb. 14 at Thompson High School looking like a team satisfied with their first postseason victory in more than a decade.

Pelham coach Joel Floyd said playing without the same zest the Panthers had against the Warriors doomed his team in a 62-50 loss to the Buccaneers in the Class 6A, Area 10 tournament title game.

The Panthers fell behind by double-digits by halftime and a comeback attempt in the second half left Pelham short of its first area tournament championship since the 1996-1997 season.

“This game we didn’t come out with same passion and fire that we did in the Thompson game until we made that (second-half) run,” Floyd said. “(Hoover) just played smart basketball and put it away.”

Tony Williams led the Panthers (10-16) with 15 points on 5-of-10 shooting from the floor. Williams, who hit 4-of-4 attempts from the charity stripe, also grabbed five rebounds.

Xavier Lacey, who added 13 points, was the only other player in double figures for Pelham. Lacey finished 5-of-11 from the field and 3-of-3 from the free-throw line.

Pelham, which finished 3-of-10 from beyond the arc, drained 13-of-15 attempts from the charity stripe. However, the Panthers struggled from deep range in the opening half as Hoover drained five 3-pointers in the first 16 minutes to take a commanding 33-19 lead at halftime.

Hoover guard Eric Dansby drained a 3-pointer with 1:17 left in the first quarter to give the Bucs their largest lead in the opening period at 16-9.

Crain swished a jumper with three seconds remaining in the first half, which capped a 9-2 run by Hoover, to give the Bucs a 14-point lead at the break.

Hutcheson nailed two free throws to cap a 6-0 run by the Bucs midway through the third quarter to push their lead to 41-25 before Pelham made its comeback attempt.

The Panthers ended the third quarter with a 13-0 run and cut the Bucs’ lead to 41-38 following a layup by Minyard with 16.7 seconds remaining in the period.

Crain’s 3-pointer with 2:25 remaining, his only 3-pointer in the second half, gave Hoover a 55-47 lead and put an end to the Panthers’ hopes of overcoming the second-half deficit.

Pelham will now travel to Spain Park for a sub-region contest Feb. 18 in the Class 6A playoffs. Floyd knows the Panthers have a difficult test ahead as they take on the Class 6A, Area 12 champions with a trip to the Northeast Regional on the line.

“It’s going to be a tough game,” Floyd said.

No matter the outcome in the sub-region game, Floyd said competing in the area tournament championship game was important for both the outgoing seniors and youthful members of the 2010-2011 squad.

“It’s a big confidence boost for our younger kids to experience it,” Floyd said. “It was great for our seniors to see the results of their hard work and dedication. I’m extremely proud of them.”