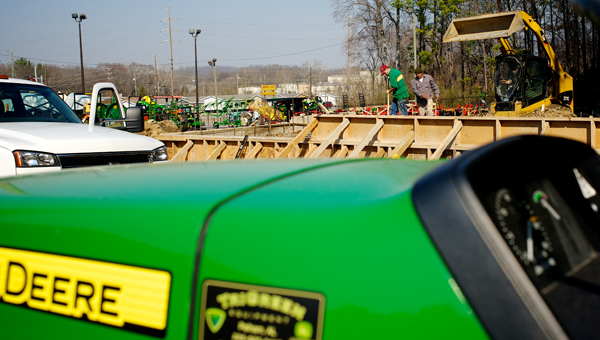 A long-vacant building in Pelham soon will have a new agriculture-friendly tenant, as one of the city’s current retailers is expanding its offerings into a former car dealership.

Trigreen Equipment, which has operated a location on U.S. 31 near the Crosscreek neighborhood for the past four years, recently leased the 15,000-square-foot former Susan Schein Chrysler dealership and is planning to open the business in early March.

The dealership, which is off U.S. 31 south of its intersection with Shelby County 52, sat vacant for nearly two years after Chrysler filed bankruptcy and terminated Schein’s dealership contracts.

Trigreen specializes in agricultural, lawn mower and commercial worksite equipment, and is a John Deere dealer. The company decided to move from its current building near Crosscreek to the former car dealership after its sales grew rapidly over the past few years, said Trigree Territory Manager Doug Johnson.

“Our business is growing rapidly, which is good. We are getting more into the agricultural equipment now,” Johnson said. “The Pelham location is our furthest south location.”

Because Trigreen’s closest dealership to Pelham is in Fultondale, the Shelby County location draws customers from a large area, Johnson said.

“The Pelham location draws business from customers in Shelby County and around Shelby County as well,” Johnson said. “Trigreen has plenty of locations, but I guess Fultondale and Cullman would be the closest to the Pelham store.

“Will this be a good move for us? Time will tell,” Johnson said. “We sure hope so, because this was a big investment for us.”

By moving to a former car dealership, Trigreen will have room to expand its service department and work on larger equipment than it was able to in its Crosscreek location.

The larger building will also allow Trigreen to triple the size of its parts department, Johnson said.

“We had some issues in our old building because we couldn’t fit some of the larger equipment in there,” Johnson said. “We will be able to provide a lot more service there, in addition to our on-site service.”

Since Trigreen purchased the former car dealership, it has been working to renovate the building to suit its business offerings.

What was Chrysler’s car lot is now surrounded by a new black fence and is filled with agricultural and commercial equipment of all kinds. Trigreen has also repainted the building and planted sod around the property.

“We had to do a lot of work to get the building up to what the city wanted it to look like,” Johnson said. “But the bottom line is that we will be able to stock much more product.”

Trigreen is holding its grand opening celebration at the new facility on March 4-5. During the grand opening, the company will hold giveaways and prize drawings. For more information, contact Trigreen at 380-3866.