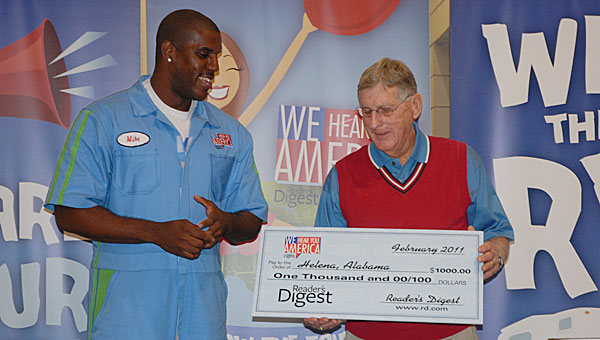 Reader's Digest representative Mike Amos, left, presents Helena Mayor Sonny Penhale with a $1,000 check as part of the magazine's "We Hear You America" campaign during a Feb. 17 stop at the Helena City Hall. (Reporter Photo/Neal Wagner)

Helena’s three schools will get an economic boost after a crew from a national publication made a pit stop at City Hall on Feb. 17.

Representatives from Reader’s Digest pulled their “We Hear You America” RV into the city at about 10 a.m. to thank Helena residents for participating in the campaign and to present the city with a $1,000 check.

Through the Reader’s Digest campaign, people across the country “cheered” for their city online in an attempt to be recognized as one of the best communities in America, said magazine representative Mike Amos.

“We asked people to go online and cheer for their city, and we gave them a chance to tell us what was so great about their city,” Amos said, noting Helena was No. 47 on the campaign’s final list. “We are traveling to every city in the top 100, and this is the 30th city we’ve been to.”

Because Helena was not as large as some of the other communities on the top 100 list, like Huntsville and Memphis, Tenn., the city’s residents showed strong support for the only Shelby County city on the list, said Helena Mayor Sonny Penhale.

“This goes to show you what kind of people we having living in Helena,” Penhale said. “We are going to take this money and split it up among our three schools to help them out a little bit.

Amos said Helena had several strong submissions on the campaign’s website, including one from a resident recently chosen to move to the second round of American Idol auditions.

“You guys had tons of impassioned stories submitted on our website,” Amos said. “One in particular was from Natalie Moon who said she would like to see Helena win the ultimate prize.

“She said she would like to see a new Helena high school because there is some overcrowding at the Pelham school,” Amos added. “That was one of the stories that ultimately led us here today.”

Penhale said Helena will be getting a new high school as a result of the recent Shelby County property tax renewal, but the campaign’s prize money will still benefit the city.

“We just passed a tax renewal, so Helena is going to get a high school,” Penhale said.