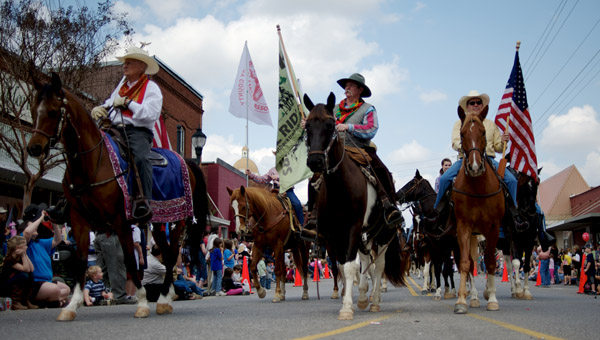 Riders in the Cowboy Parade make their way down Main Street in Columbiana during the parade on Feb. 19. (Reporter Photo/Jon Goering)

“I think it was pretty much what we wanted it to be,” Handley said. “We got the good weather, and then we had a good crowd.”

The third annual event featured a variety of cowboy-themed events, from vendors to eating contests to a parade of horses and buggies down Main Street.

Vendors sold food at the old Summer Classics property, and demonstrations ranging from herding dogs to blacksmiths were held.

There were more vendors and more demonstrations than in past years. Handley said he’s received “nothing but positive feedback.”

Unlike previous years, the idea this year was to spread the event out from 10 a.m. until 5 p.m. for spectators. In the past, many people have left after the noon parade.

There was also more for riders to do. The parade drew a total of 105 riders plus six wagons or buggies.

After the day was over, riders had the option of riding several miles of trails, accessible from downtown, and then sitting around a campfire and eating beef stew. Some even spent the night outdoors Saturday night. About 30 riders participated in the campfire activities.

“Overall, I’m delighted,” Handley said of the riders-only portions of the event. “I was really happy with it.” 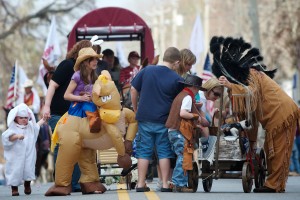 The Cowboy Parade makes its way down Main Street during the parade on Feb. 19 in Columbiana. (Reporter Photo/Jon Goering)

He said there’s plenty of room to grow. He said he hopes the event eventually will draw up to 300 or 400 riders as word of the event gets around to various riding clubs.

The grits-eating contest, new for this year, was successful, Handley said, adding that the adult winner consumed four and a half pounds of grits in five minutes.

“That’s pretty darn good,” Handley said. “We will do the grits eating again.”

The mechanical bull came from Rome, Ga., and was a big hit as always, Handley said.

“Be there early to get a good seat,” Handley said. “We plan on selling out both nights.”

“The money is used to promote the beef industry and a large, large, large part of it is used by the cattlemen’s association to promote youth activities and youth events,” Handley said. “We have donated and sponsored any county youth activity that has to do with beef production or even farming in any way.

“The cattlemen are stewards of the land,” he added. “We are trying to promote education, especially among our youth.”