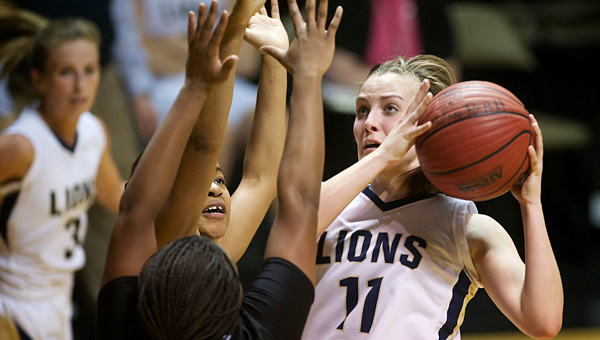 Briarwood's Anna Handlin (11) tries to get a shot up over a pair of Fairfield defenders during the 5A Regional Semifinal game on Feb. 23 in Montgomery. (Reporter Photo/Jon Goering)

MONTGOMERY – The mood inside the Briarwood Christian School locker room Feb. 23 stood in stark contrast to the girls’ basketball season the Lions had just completed.

There were tears, sadness – just about everything you’d expect after Briarwood’s season came to an abrupt end with a 54-48 loss to Fairfield in a girls’ semifinal game of the of the Alabama High School Athletic Association’s Class 5A Central Regional tournament.

As the players filed out of the locker room inside the Dunn-Oliver Acadome on the Alabama State University campus, Briarwood coach Jim Brown said they have nothing to hang their heads about.

“I really felt like we had a chance to win the game,” Brown said of Briarwood’s first region tournament contest in five years. “It comes to an abrupt end for everybody but one team.” 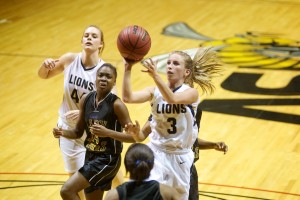 Briarwood's Cara Medders (3) puts up a runner in the lane over the top of the Fairfield defense during the second half of the 5A Regional Semifinal on Feb. 23 in Montgomery. (Reporter Photo/Jon Goering) 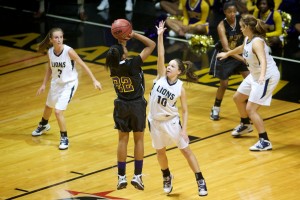 Briarwood's Abigail Cutcliffe (10) tries to get a hand in the face of Fairfield's Kathryn Goldsby (22) as she shoots a jumper during the second half. (Reporter Photo/Jon Goering)

“This team flew under the radar all year long,” he said. “They were really under-noticed and under-appreciated, I think, except locally [in Shelby County]. They showed today that they belong here.”

Briarwood started strong in the first half, outscoring Fairfield 11-10 in both the first and second quarters to lead 22-20 at halftime. 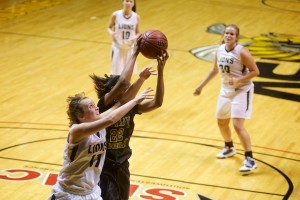 Briarwood's Anna Handlin (11) can't quite reach a rebound as Fairfield's Kathryn Goldsby (22) flies in to snatch it up. (Reporter Photo/Jon Goering) 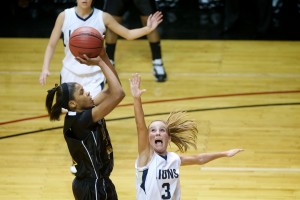 Briarwood's Cara Medders (3) tries to disrupt a jumper by a Fairfield player during the second half. (Reporter Photo/Jon Goering)

Briarwood’s offense wasn’t the same, and Fairfield outscored the Lions 20-10 in the third quarter to lead 40-32 entering the fourth quarter.

“They ran about three different people at her – good, quick people who weren’t trying to do anything at all on the offensive end,” Brown said of Fairfield’s strategy to contain Medders. “They were only concerned about guarding her. It disrupted our offense a little bit and kept us from getting some of the looks we’d been able to get in the first half.”

Fairfield led by as many as 12 points in the fourth quarter. Briarwood strung together a late run but never pulled to within five points of the lead the rest of the game.

Anna Handlin scored a game-high 20 points for Briarwood, including 6 of 7 shooting from the free-throw line. She finished with seven rebounds. 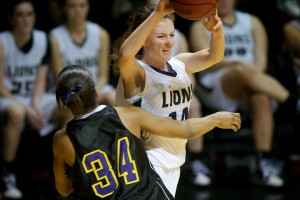 Medders made 9 of 9 free throws and finished with 13 points.

It was the last game in the high school playing careers of guard Marie Tucker, forward Handlin and center Meredith Botes. All three played with Briarwood through its junior high program.

The trio helped guide Briarwood to a school record for most victories in a season since the school joined Class 5A competition before the 2000-2001 season.

“They all had terrific senior seasons,” Brown said. “Obviously we’re going to miss their play on the floor, but I’m really going to miss them personally. They were great to be around. It’s going to be hard to watch them graduate.”

Calera's Deondre Haynes (4) and Ronnie Clark (22) celebrate with their teammates following their victory over Dadeville in the 4A... read more