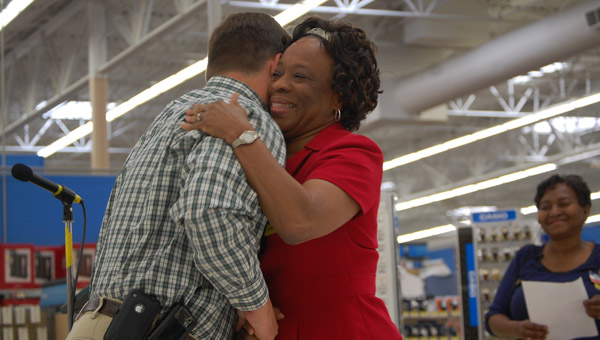 CALERA – Grace Gibson knew employees at the Calera Walmart had a black history month program planned for the morning of Feb. 24.

What Gibson, the store’s manager, didn’t know was that she was the guest of honor.

During the 30-minute program held inside the store, Gibson was honored for being one of the first black women in the area to be promoted to Walmart store manager. 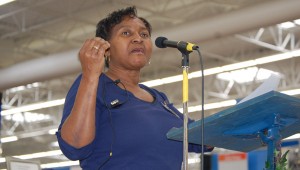 Calera Mayor Jon Graham presented Gibson with a plaque of appreciation and offered congratulations for her professional accomplishments. Graham read the plaque to the 30 Walmart associates gathered for the occasion:

“In appreciation to Ms. Grace Gibson for her courage and leadership that has inspired Walmart associates to accept ideas and change,” the plaque read. 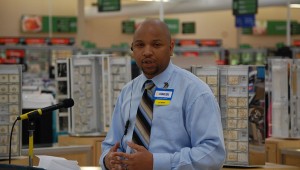 Marlon Brown gives a brief work history timeline for Grace Gibson, who has worked for Walmart for 25 years, the last 10 in Calera. (Reporter photo/BRAD GASKINS)

Gibson, normally at the store every day, said her associates were able to surprise her because she’d been out with a minor medical issue for the last several days. She actually woke Feb. 24 with a headache so severe she nearly called in sick.

“I knew they were having the program today and I knew I needed to be there to support them, never knowing I was supposed to be in the program,” Gibson said. “This turned out really well. I work with a great group of people.”

Gibson said she hopes she has done something to inspire others.

“It hasn’t been easy at times, but it’s been a great ride,” she said. “Hopefully I will have people that will go on and do more than I do, like becoming vice-president of the company. If not that, then be the best department manager they can be.”

The program’s theme was “I have only just a minute.”

Patricia Tagger opened the program with a greeting. Joan Killingsworth said the prayer, and the Walmart Store No. 3271 Choir presented a song. Marlon Brown spoke briefly and Irene Grandison performed a solo song.

Felica Lang was the featured speaker. Her passionate speech was sprinkled throughout with Bible verses and quotes from civil rights leaders, from Rosa Parks to Dr. Martin Luther King Jr.

“As we recognize our store manager today, we realize that she had a dream to make it better for herself,” Lang said, bringing the speech to a close and shifting the focus back to Gibson.

“She stepped out in courage, and in 25 years she has done those things and made a difference in the lives of many people,” Lang said. “She’s just one ordinary person doing an extraordinary thing.”