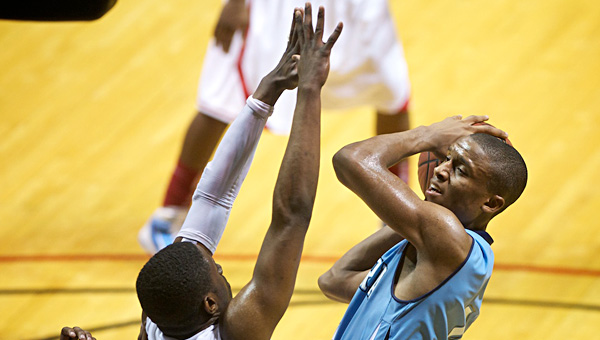 Calera's Deondre Haynes looks to get a shot around the outstretched arms of a Midfield defender during the regional finals on Feb. 25 in Montgomery. (Reporter Photo/Jon Goering)

The Eagles battled the Patriots three times and came up short in each collision heading into the Alabama High School Athletic Association Class 4A Central Region tournament championship game.

The two teams met in one final showdown with a trip to the AHSAA Class 4A Final Four on the line Feb. 25 at the Dunn-Oliver Acadome on the Alabama State University campus. Midfield emerged victorious in a 68-65 win over Calera in the fourth clash and dashed the Eagles’ hopes of a return trip to the Birmingham Jefferson Convention Complex for the first time since the 2004-2005 season.

Junior Jeremy Hyde, whose brother Wade played on the last Calera team to make the trip, said the Eagles didn’t play to their ability in the final game of the season.

“I just didn’t want to go home,” Hyde said. “I wanted to keep going. But we have to have effort and execute.”

Deondre Haynes chipped in 21 points, seven rebounds and five assists. Ronnie Clark finished with 11 points and seven boards. Haynes and Clark were each named to the AHSAA Class 4A Central Region all-tournament team. 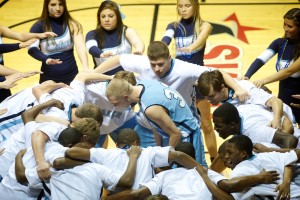 Led by senior Blayne Sumerall (32) in the middle of the circle, the Calera Eagles get pumped up before the start of the game. (Reporter Photo/Jon Goering) 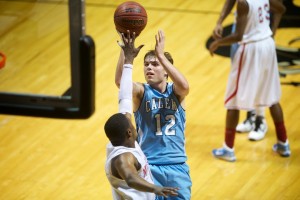 Calera's Jeremy Hyde (12) goes up for a shot over a Midfield defender during the second half. (Reporter Photo/Jon Goering)

The Eagles had a difficult time defending Midfield guard Andrew Gilmore, who finished with a game-high 35 points on 16-of-26 field goals. Gilmore scored four of the Patriots’ final six points in the third quarter and the first 16 points for his team in the fourth quarter to help erase a nine-point Calera lead midway through the third quarter.

“(Midfield) decided to give the ball to (Gilmore) and he was making tough shots,” Burdette said. “They weren’t easy.”

Midfield jumped out to a 17-10 lead at the end of the opening quarter following a layup by Brian Bender with 47 seconds remaining in the first period.

The Eagles went on a 9-0 run early in the second quarter and tied the game at 21-21 following a jumper by Haynes with 5:28 left in the first half. Hyde scored a fastbreak basket off an assist by McCord and extended the Calera run to 13-2 and gave the Eagles a 25-23 lead, their first lead since leading 2-0 in the opening minute, with 3:49 remaining in the first half.

Calera finished the second quarter with a 6-0 run. The run included  a layup by Hyde, a crowd-frenzying dunk by Haynes and a layup by McCord off a steal, which gave the Eagles a 37-30 lead heading into the locker room at halftime.

Haynes led the Eagles with 14 points in the first half. 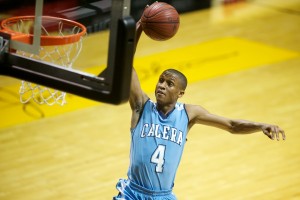 Calera's Deondre Haynes (4) flies through the air on his way to a slam during the first half of the game against Midfield in the regional finals on Feb. 25 in Montgomery. (Reporter Photo/Jon Goering) 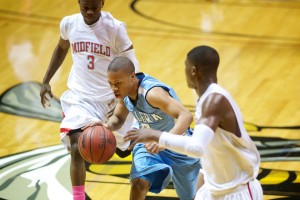 Calera's Eric McCord splits a pair of Midfield defenders during a fast break in the first half. (Reporter Photo/Jon Goering)

Calera pushed its lead to nine points on three separate occasions in the third quarter, including a 44-35 lead with 3:50 remaining in the period following a three-point play by Haynes.

Gilmore quickly responded with a floater in the lane on the other end, which provided early momentum in the Patriots’ comeback.

The Eagles temporarily stymied the Midfield run following an offensive rebound and a basket by McCord with 2:42 left in the fourth quarter, which gave Calera a 60-57 lead. However, Jared Key drained a 3-pointer and scored a layup to cap a 7-0 run by the Patriots. The stretch gave Midfield the lead for good.

Sumerall’s defensive pressure forced a Midfield turnover in the final minute. The senior drew a foul on a drive to the basket moments later, but Sumerall missed both free-throw attempts to leave the Eagles with a four-point deficit. 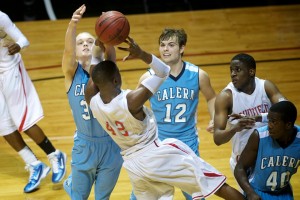 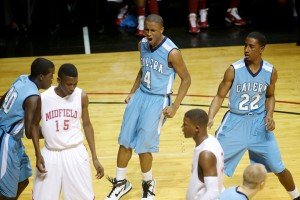 Adams drew a foul and drained 1-of-2 free throws with 12.2 seconds remaining to cut the Midfield lead to three points at 68-65.

Following a missed free throw by Midfield with eight seconds left, Clark pushed the ball up the floor and fired a pass to Haynes in the corner for the final shot. Haynes’ 3-point attempt came up just short and bounced off the right side of the rim to seal the Midfield victory.

Haynes, who made only 10-of-27 field goals, said the Eagles will learn from their trip to the AHSAA Class 4A Central Region tournament championship game.

“We can’t focus on a region championship when we don’t even take care of it in practice,” Haynes said. “We’ve got to take it one step at a time.”