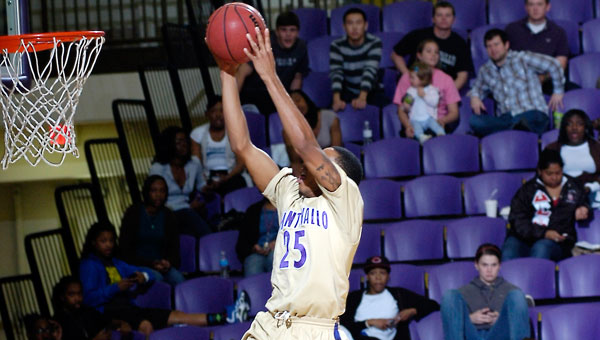 University of Montevallo junior guard Ryan Westbrooks drives to the basket in the Falcons' 74-68 win over Georgia College and State University in a first-round matchup in the Peach Belt Conference tournament March 1 at BankTrust Arena. (Contributed/Matt Orton)

Brown, who helped Montevallo knock off the Jaguars in the semifinals last season, and his teammates don’t have the same luxury this season.

The Falcons earned a return trip to the Peach Belt Conference tournament semifinals and another meeting with Augusta State following a 74-68 win over Georgia College and State University in a first-round matchup March 1 at BankTrust Arena.

Brown said the Falcons (18-9) are focused on repeating last season’s upset victory over the Jaguars, who enter the contest ranked No. 5 in the latest National Association of Basketball Coaches’ NCAA Division II poll. A win over Augusta State is pivotal if Montevallo hopes to earn a second consecutive bid to the NCAA Division II tournament.

The Falcons will meet the Jaguars in the semifinals March 5 at 5 p.m. at the University of South Carolina in Aiken Convocation Center in Aiken, S.C.

The Falcons were ranked ninth in the latest NCAA Division II Southeast Region rankings. The top eight teams in the region rankings at the end of the season earn a tournament bid.

“It’s going to take getting to the championship game to get an NCAA bid,” Brown said. “Our life is still on the line.”

Montevallo coach Danny Young, who is down to seven scholarship players and one walk-on, said the Falcons enter the Peach Belt Conference tournament semifinal with nothing to lose.

“Our mindset is survive and advance,” Young said. “That’s what we’ve become.”

Junior Antoine Davis led the Falcons with 17 points on 5-of-12 shooting from the floor. Davis, who grabbed a team-high 10 rebounds to finish with a double-double, drained 7-of-9 free-throw attempts and finished with a team-best three assists and three steals. 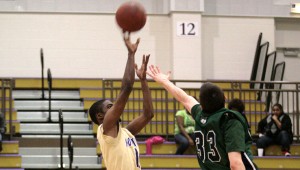 University of Montevallo junior guard Tyrell Coleman fires a 3-pointer in the Falcons' 74-68 win over Georgia College and State University in a first-round matchup in the Peach Belt Conference tournament March 1 at BankTrust Arena. (Contributed/Dawn Rasco)

Montevallo shot 92 percent from the free-throw line after hitting 24-of-26 attempts from the charity stripe, including 11-of-12 attempts in the final 7:02.

The Falcons went on a 9-3 run midway through the first half to take its largest lead in the first half at 19-13 following a jumper by Jackson with nine minutes remaining in the half.

The two teams traded baskets down the stretch in the first half before the Bobcats went on a 4-0 run to tie the game at 32-32 with 40 seconds remaining in the opening half. Catchings drained two free throws with 22.9 seconds left in the first half to send the Falcons into the locker room with a 34-32 lead at the break.

Montevallo came back minutes later with a 4-0 run, capped with a steal and a three-point play by Davis, to take a 45-41 lead with 15:11 left in the game. The Bobcats responded with another 7-2 run to take their first lead since leading 2-0 in the opening half following a 3-pointer by Holmes, which gave Georgia College and State a 49-48 lead with 12:18 remaining.

Montevallo followed with a 5-2 run to take a 53-51 lead after a runner on the baseline by Jackson with 10:19 left in the game. The Bobcats responded with an 8-0 run, capped with a jumper by Ryan Legates, to take a 59-53 lead with 8:34 remaining in the contest.

The Falcons ran off six straight points to tie the game at 59-59 following a floater by Davis with 5:57 left. Two free throws by Brown gave Montevallo a 61-59 lead with just more than five minutes remaining.

The two teams traded baskets for the next two minutes before a 3-pointer by Ryan Aquino gave the Bobcats a 66-65 lead with 2:38 left in the game.

The one-point advantage was the last time North Georgia College and State led in the contest.

Jackson grabbed an offensive rebound and scored a basket to give Montevallo a 67-66 lead with 2:04 left in the game, and the Falcons hit 5-of-6 free throws in the final two minutes to ice the six-point victory.

The Falcons, who advanced to the Peach Belt Conference tournament championship game a year ago, lost preseason All-Peach Belt Conference pick Cecil Coleman and scoring threat Miles Beatty along with Demarcus Richard and Tyrone Gordon for various reasons during the regular season.

“We feed off one another,” Brown said.