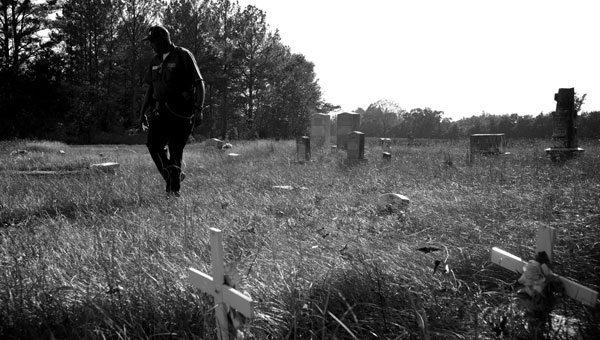 Albert Datcher walks through the family cemetery, which is located beside the old baptist church in Harpersville. (Reporter Photo/Jon Goering)

If land could talk, the stories the Datcher family farm could tell.

Begun by former slaves, the now 500-acre farm in Harpersville envelopes the original 100 acres, purchased for $500 by newly freed slaves Albert Baker and his wife, Lucy Wallace Baker, in 1879.

Unfortunately, most of the stories of the Bakers’ lives are lost, as often was the case in black families. The pain of the past was something Albert Baker Datcher Jr.’s ancestors wanted to put behind them.

But Datcher, after having an awakening of sorts, is determined to learn as much now about his great-grandparents’ lives as possible.

Very few details of the pre-Civil War life of Datcher’s great-grandfather, Albert Baker, and great-grandmother, Lucy Wallace Baker, were passed down within the family.

Datcher grew up knowing his ancestors were slaves. After all, most blacks born and raised in the south are descended from slaves.

As a young boy, his mother told him what she knew about his great-grandparents. After 50 years of slavery, Albert Baker became a landowner in the 1870s and began a thriving farm that provided shelter and refuge for many during those early years after the Civil War. Lucy Baker Wallace was a noted midwife and delivered many babies during that same time.

But Datcher said few of those stories meant much to him until he reached about the same age that his great-grandfather was when he became a free man.

“Because I was young, I didn’t care so much. It wasn’t until later, when I was standing up in the graveyard between the farm and the church and was looking at my great-grandfather’s tombstone that I realized the life he must have led,” Datcher said.

“According to his tombstone, he lived until he was 105 — born in 1812 and died in 1917. When I saw that, I said to myself, ‘Wait a minute. He was 50 years old when he became a free man.’ I was just about turning 50 myself and I thought, ‘Oh, God. When he was freed after the life that he lived, he had nothing. He never owned anything. Never did his labor mean anything for him. His life really didn’t start until he was 50 years old.’

“Just think about what he accomplished after age 50. Thinking about that made me feel very bad about myself. I went to college for three years – could have graduated, but I wanted to farm. I had every advantage. And thinking about his life, and what he overcame, it made me think about myself, ‘Man, you aren’t worth a darn.’ ”

That realization at about age 50 started a fire inside the great-grandson of slaves and Datcher has spent much of his time since researching their lives and his family.

His life was not his own

Information about Albert Baker’s early life is sketchy. Datcher knows that later in his life, Baker was a slave on the Scott plantation, which was located near the Wallace-Klein plantation, between Wilsonville and Harpersville.

Those were two of the largest plantations at the time in southern Shelby County, he said. Datcher’s research in the Alabama archives show each of those plantations operated with more than 100 slaves each.

Datcher said evidence shows Albert Baker was a devoutly religious man and attended Scott’s Grove Church. Pastor of the church was the Rev. Scott, who was a white slave owner.

“Albert Baker was so religious, I mean, religious to the teeth. One story that has been passed down in the family was he once had his son-in-law arrested for cussing on Sunday,” Datcher said.

While Albert Baker was born in the area, the census during that time lists his father as having been from Tennessee and lists the Baker side of his family as being of mixed black and white ancestry.

“All of his Baker relatives are listed as mulattos. We think his grandfather may have been white,” Datcher said.

Lucy Wallace Baker, on the other hand, was born on the Wallace Klein plantation, he said.

She was considerably younger than Albert Baker, but the two met at Scott’s Grove Church. She lived to be 100 years old, dying in 1930.

The one story Datcher remembers hearing from his grandmother, Rachel Baker, daughter of Albert and Lucy Wallace Baker, came about because of her curiosity about the scars on her father’s back.

“She said one day he was pulling his shirt off and she saw whelp scars on his back. She didn’t dare ask him about it because he was so strict, but she asked her mother. She told her that he had slipped off the Scott plantation to come and see her, but got caught when he was returning. They beat him for it,” Datcher said.

A free man — and landowner

Datcher believes his great-grandfather grew up on a plantation owned by the Singleton family. Later in his life, he was sold to the Scott plantation, he said.

After the end of the Civil War and gaining his freedom, Datcher said his great-grandfather continued to live and work on the Scott plantation.

The Singleton plantation was owned by Dr. John Singleton, who left his plantation to his son, Dr. W.R. Singleton, also a slave owner, who was about the same age at Albert Baker.

“We think they knew each other when they were younger and became such good friends that Dr. Singleton deeded the 100 acres of land to Albert and Lucy Baker in 1879,” Datcher said. He has the original, hand-written deed, which transferred the land from Singleton to his great-grandparents.

“It was said to me that Dr. Singleton cared so much about my great-grandfather, that he sold the land to him for basically nothing. It had to say it was $500 on the deed because you couldn’t do anything for a black person at that time,” Datcher said.

The Baker homestead, which still stands on land across the street from where Datcher lives today, was home through those difficult years to a myriad of black families, many newly freed from slavery, looking for work, shelter and food for their families.

It was a win-win situation for Albert Baker, who needed labor to help operate his farm. Two who came to settle on the Baker land were Louis Datcher and his wife, in 1880.

While Albert Baker was busy on his farm, Lucy Wallace Baker worked as an accomplished midwife.

“I found records on Lucy Baker being a midwife at the Alabama archives. She was one of only two sanctioned midwives who were ex-slaves,” Datcher said.

Her daughter, Rachel, also took up midwifery, he said.

“They were also herbalogists and known for mixing herbs and using them to keep people healthy,” Datcher said.

One of Rachel’s daughters, Ada Sanders, also became a midwife and delivered babies in Alabama from 1940 to 1973. Datcher has her journals, detailing her deliveries.

“For a long time, I did not understand the love for the land that my daddy and my granddaddy showed. I didn’t understand how important this land was, that it had been a magnet for others and had been a safe place, a haven that helped people and families survive,” Datcher said. “When Albert Baker was starting this farm, a lot of families plopped down right in here, next to him. My grandfather did the same thing during the Great Depression. Lots of people stayed right here, helping him.”

“Daddy was a most prolific farmer. He had cows, hogs, a hog parlor, sold chicken eggs, had chickens for sale. We had at least 100 head of cattle, we sold between 100 and 150 hogs per year. He also raised cotton, soybeans, wheat, oats, peanuts, sorghum, clover and corn.

Today, the Datcher family farm is the largest, black-owned farm in Shelby County and is operated by Willie Datcher’s son, Marvin, with the aid of his brothers.

Datcher, whose home is filled with notes, papers, books, tattered family records and photos, hopes to compile his research into a book one day.

Until that time, he is making certain his only child — daughter Altonett Datcher — as well as his nieces and nephews and other family members know about their roots.

“My daughter knows all about her family, everything I have learned. In fact, I may have told her too much. It’s to the point that she is telling me to shut up,” Datcher said.

City of Chelsea flourishing in down economy

By CHRISTINE BOATWRIGHT / Staff Writer CHELSEA – Even after three years of a down economy, the city of Chelsea... read more