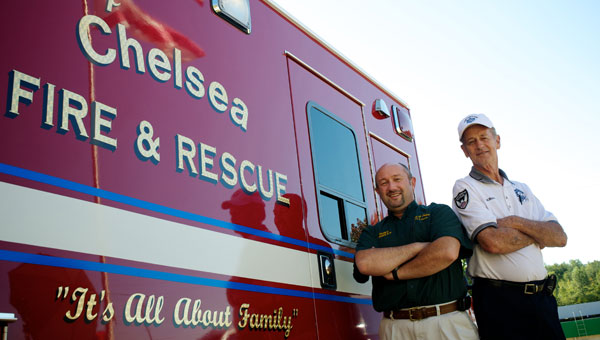 Donald Shirley passed on his love of firefighting to his son Wayne, who is now the fire chief in Chelsea. (Reporter photo/Jon Goering)

House fires and car wrecks may seem like odd settings for family reunions, but for several Shelby County firefighters, looking across a blaze into the face of a father, son or brother, is just another day on the job.

None know this better than father and son pair Donald and Wayne Shirley in Chelsea, whose easy-going relationship was formed over years of responding to emergencies.

Wayne, who now serves as the Chelsea Fire Chief, said he grew up in the same fire station he now works in everyday. In 1980, Donald helped build that station with his own hands, clearing land and laying cinder blocks.

When he wasn’t working as a diesel mechanic, Donald volunteered for the first volunteer fire department in Chelsea. Wayne was 11 years old and thought hanging out at the fire station and riding along on calls with his dad was heaven.

“I don’t think I respected it enough then to worry about him,” Wayne said. “At the time I just thought it was exciting.”

As soon as Wayne was old enough, he started volunteering at the station, also.

“We always rode together going on calls,” he said. “When we were volunteers, we’d just get in the car or meet each other there. We ran every call that came in.”

More than 10 years later, they’re still running calls together even though Donald has retired from the fire department. Now he volunteers on the Chelsea Citizen Observer Patrol and often assists at fire and police calls. Donald said he likes being able to help out his son and other public safety officials.

“If he needs something, he knows who to call and vice versa,” he said. “I keep a two-way radio in the truck so I listen to all the calls. I’ll run home, put on my uniform and go help out.”

The Shirleys aren’t the only family that often work emergency calls together. A tire fire in Alabaster once found five members of the Reid family responding to the same call – Bill Reid, fire chief at the Montevallo Fire Department, and his four sons. Bill said he remembers someone teasing him by asking, “Why didn’t you bring your wife?”

The four Reid sons – triplets Phillip, Danny and Mike and younger brother Andy – all said they remember growing up among the fire trucks in Montevallo.

At the age of 14, they each joined the Fire Explorer program, allowing them to assist on calls and learn from the volunteer firefighters.

“As long as we can remember, we’ve been running around the fire station,” Danny said. “I remember going out on calls at 3 a.m – only on weekends of course. All of us and our friends would hang out at the fire station instead of being at home playing Nintendo.”

The Reids still spend most of their time at fire stations across the county. Phillip and Andy work fulltime at the Alabaster Fire Department and Danny and Mike work in Pelham. Mike also volunteers with his dad in Montevallo.

“When I look at this place, even just driving by, I think, ‘That’s home,'” Mike said. “This is where we all got our start.”

Phillip said he thinks the reason firefighting often stays within families is the sense of family that already exists within fire departments. All four of the Reid sons now have children of their own but say they have no expectations when it comes to their kids’ career choices.

“We were never pressured or pushed in any direction,” Mike said. “Whatever we wanted to do was fine with our parents. I want to have the same attitude with my kids.”

Wayne Shirley said he feels the same about his sons, who so far have not shown an interest in firefighting.

“I don’t want to force it on them,” Wayne said. “I want them to do what makes them happy. I want them to have that choice like I did.” 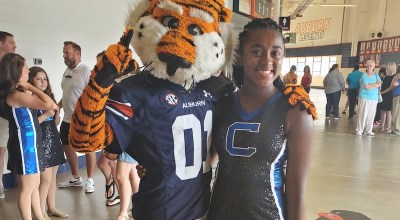 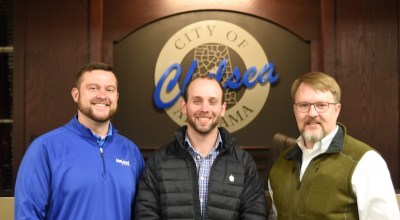