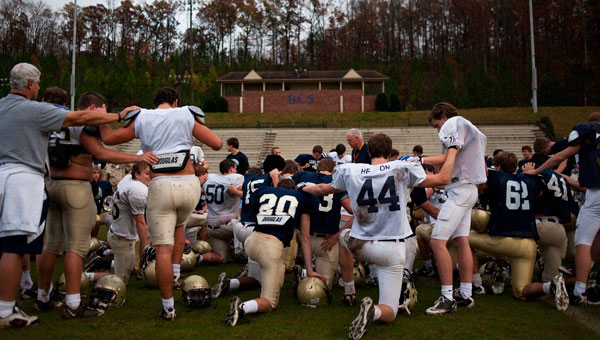 At one school, state titles aren’t a dream — they’re an expectation.

Briarwood Christian School junior quarterback Ben Craft, who saw the Lions’ football program as an outsider from rival Chelsea before joining the team in 2009, is one of the best sources on the subject.

“Growing up in Chelsea, we modified our system after Briarwood,” Craft said. “I admired the program. They were always at the top. They always had great players and great coaches. That’s what (Briarwood) is known for.”

Briarwood football and championships fit together as tight as the team’s gold helmets and white chin straps.

Briarwood is among the winningest high school football programs in the state of Alabama. The Lions have won more than 70 percent of their games since joining the Alabama High School Athletic Association in 1983. That percentage rose to nearly 80 percent during the past decade.

The staggering numbers are impressive for a program that was once considered run-of-the-mill.

The Lions wandered through the high school football landscape in the Alabama Christian Athletic Conference in the program’s first 11 years of existence. Briarwood didn’t experience much success in its first six years under the AHSAA umbrella, either.

No one confused Briarwood for a championship contender back then. The Lions managed only five playoff appearances and one region title before 1990.

The first step in Briarwood’s championship progression came when the school hired Fred Yancey as its head football coach in 1990.

Yancey, who coached high school football in Tennessee and Georgia before joining the Lions, needed only one season to put Briarwood on the map.

Yancey coached the Lions to an 11-2 record, which was a nine-game turnaround from the season before he arrived, a region championship and an appearance in the Class 3A quarterfinals in his first season at the helm.

Since taking over the program, Yancey has led the Lions to more than 200 victories, 19 region titles, including 18 consecutive region championships, and three AHSAA state championships.

Another magic ingredient in the Lions’ success has been the assistant coaches. Yancey’s staff annually includes at least a handful of former collegiate players, including former Alabama star Chris Donnelly, who won a National Championship as a player with the Crimson Tide.

“This is a complete staff,” Yancey said. “They have a big picture view of why they’re coaching. To them, it’s way bigger than football. They’re molding kids for a lifetime.”

The school has produced approximately three dozen collegiate players during Yancey’s time as the Lions’ head coach, including more than 10 players who played in the Southeastern Conference.

Yancey gives credit for the Lions’ accomplishments in the past two decades to the countless players who donned the navy and gold on Friday nights and took the natural-grass field at Lions Pride Stadium.

“We’ve always had a bunch of great kids who’ve been willing to work hard,” Yancey said.

Many of the best players to matriculate through the Briarwood program were standouts at the same position.

In college, there’s a phrase, ‘Quarterback U,’ for programs that consistently produce the best signal callers headed to play professional football.

If there was such a term at the high school level, Briarwood Christian School fits the bill.

There is a common link between the best teams in school history — an All-State quarterback running the offense.

From Bart Yancey to Jeff Flannery and Joe Craddock to Barrett Trotter, the Lions always feature a mobile athlete with a strong arm behind center.

Craddock, who just wrapped up his first season as the Lions’ offensive coordinator, said the Briarwood program is known for its quarterback tradition. The tradition includes a special jersey number — No. 7 — reserved for the school’s best quarterbacks.

“(Wearing No. 7) means a ton,” said Craddock. “A lot of great quarterbacks wore it before and after my time.”

It all started with Bart Yancey, the son of the head coach, who took over a 2-7 team and led it to an 11-2 turnaround in the duo’s first season at the school in 1990.

Yancey became the first Briarwood quarterback to continue his career at the collegiate level when he signed a scholarship to play at Samford University. Yancey still attends every Briarwood game, his father said.

Flannery was the next great Briarwood quarterback, as he led the Lions to back-to-back Alabama High School Athletic Association Class 3A state championships in 1998-1999. Flannery also played collegiately at Samford.

The tradition continued with Craddock, who quarterbacked Briarwood to its first AHSAA Class 5A state championship in school history in 2003. Craddock, who played in college at Middle Tennessee State University, recently joined the Lions’ coaching staff after a professional playing career in Italy.

Trotter, the most recent college-ready quarterback to come out of the school, is a redshirt sophomore at Auburn University. Trotter, who led Briarwood to the Class 5A championship game as a senior in 2007, holds most of the Briarwood passing records, including career passing completions, yards and touchdowns.

The quartet holds the premier spot in the statistical record book at Briarwood in all passing categories. The group is joined by three other standout quarterbacks who wore jersey No. 7, including Daniel McClurkin, Alex Mitchell and Paul Barber.

Yancey said he was able to see the potential in each of his star quarterbacks before they took the field.

One word comes to mind when the quarterbacking quartet and other past Briarwood football players are the topic — family.

From head coach Fred Yancey coaching his son at quarterback and Forrester, a defensive assistant coach, teaching his sons the same fundamentals he utilized as a player, there have been many family connections within the program since 1990.

If there was a first family of Briarwood Christian School football, it would be the Castille family.

All three of Castille’s sons played for Yancey at the school.

Any offensive record not held by a quarterback most likely has Tim Castille’s name written at the top. Tim starred on both offense and defense on Briarwood’s two AHSAA Class 3A title teams in the late 1990s before following in his father’s footsteps in Tuscaloosa.

Tim is now in his fourth season of professional football with the National Football League’s Kansas City Chiefs.

Caleb Castille, the youngest of the siblings, wrapped up his career at Briarwood following the 2009 season. Caleb is currently a redshirt freshman for the Crimson Tide.

Yancey recruited Jeremiah to the school as an assistant coach during Tim and Simeon’s playing careers, but he joked the former National Football Player wasn’t the main target.

“I’ve joked with all of our coaches, I wasn’t only trying to get you, I was also trying to get your sons,” Yancey said. “We’ve had some great players come through the program, and the Castille brothers lead the pack.”

Members of the Castille family played a key role in Briarwood’s best teams, but they weren’t the only reason for the Lions’ success.

The star players have always been surrounded by committed role players who gave the Lions their championship edge, Yancey said.

Players have meant the most to Yancey. It’s evidenced by a glance at his coaches’ office. The school’s championship trophies are buried behind a stack of paperwork.

Meanwhile, photos of the school’s past players are plastered on bulletin boards around the office. Posters written in calligraphy document the seasons of the best teams in school history.

Yancey and his assistant coaches sit around a conference table watching game film and soak it all in on a daily basis.

“That’s really one of the fun things about coaching at Briarwood,” Yancey said. “We’ve had so many great kids who were never stars, but they bought in and meant a great deal to the program. They made other players better.”