PROFILE: Behind the glass 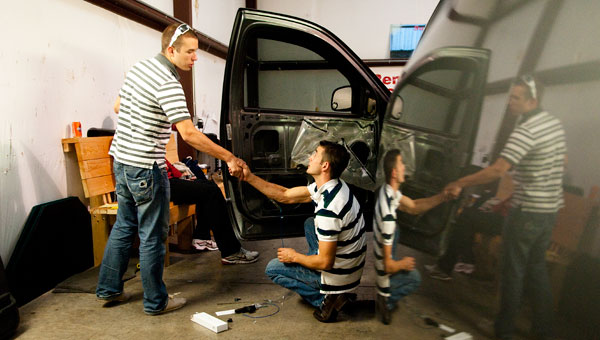 By DAVIS POTTER / For the Reporter

Lounging in a rocking chair in the back room of his shop on a cool October day, Richard Wormington takes an afternoon break from his work.

Wormington, the owner of Accurate Tint and Audio in Pelham, grabs a cigarette off the table in front of him, positions it between his lips and ignites the end with a lighter.

The dormant season allows for more of these breaks for Wormington, who estimates that he does 15-20 auto window tinting and audio jobs per week.

As the smoke slowly exits through his nose and mouth, he sits approximately 210 miles from his hometown of Milton, Fla., where breaks were hard to come by.

Wormington spent his childhood living in a trailer with 15 brothers and sisters and his mother, Diethilda, on a plot of land owned by an uncle in the north Florida city.

Wormington’s mom worked at a local gas station, and his aunt and uncle struggled to keep steady jobs. The trailer was nearly all they had.

With no running water, Wormington and his siblings bathed in a nearby creek. The chickens and pigs his uncle owned served as the family’s food source.

“Mostly all we would ever eat was just eggs, pork and beans,” Wormington said.

Wormington wanted better, and he would have to try to get it on his own.

With little to no source of income and with school falling through – Wormington said he was in and out of 12 schools before dropping out in the 10th grade – he found his first job at age 14 at a nearby junkyard.

A year later, Wormington landed a job at a car wash in Niceville, Fla.

Before issuing his first paycheck, Wormington said his employer asked him for his driver’s license to verify his age.

He was fired on the spot. As he was leaving, Wormington was approached by a fellow employee with an alternative – tinting.

“That’s how I started to get into window tinting,” Wormington said.

Wormington took an instant liking to the new job.

“I got pretty good pretty quick,” he said.

After a couple years of training, Wormington was ready to put his skills to the test.

At 17, he entered a tinting tournament in Daytona Beach in April 2001. Wormington finished in first place and fielded job offers from tinting companies in California and Texas.

The 18-year-old took a job with Sun Pro Glass Tinting in Stafford, Texas.

“He was a young guy, and everything about him was gung-ho,” Hanson said. “Whatever you put him on, he did a good job. I give him a thumbs up.”

Wormington also tinted the homes of singer Jewel and actor John Travolta, the Enron tower and a space shuttle for the Houston-based Johnson Space Center.

“That’s when tinting windows got more exciting for me than it ever has,” Wormington said.

While the money was good, one part was missing.

“Family,” he said. “That means more to me than anything. I wanted to be closer to my family.”

So Wormington left Sun Pro in 2005 and moved with his girlfriend, Shay – whom he would marry a year later – to the Birmingham area, where his mother had relocated with her boyfriend.

He used his savings to buy a house in Maylene and took a job working for his future stepfather at a local steel plant. It was an experiment that wouldn’t last long.

“I didn’t click with him too much,” Wormington said.

At the same time, the Tom Williams BMW dealership in Irondale had an opening for a tinter.

“I went up there and tinted a car for them just to see what I could do,” he said.

He got a job tinting the dealership’s cars on the weekends.

Soon, Wormington realized owning a business was a real possibility.

In February 2007, he rented a building in the area for $400 a month and opened his first business.

After nearly a year and half of successful operation, the business took a hit Wormington didn’t see coming.

Wormington was offered the opportunity to tint the windows of 28 California hospitals in December 2009. He accepted the job and closed his shop for the entire month, leaving the checkbook to the company account behind.

One of Wormington’s employees, who had a key to the building, decided to take advantage of his absence, stealing more than $27,000 from the company account.

Six months later, Wormington walked into his shop on a Monday morning in June 2010 to find most of his tint, audio equipment and wheels damaged while the rest was stolen.

The course of events left the business’ finances in shambles.

“I was tripping bad,” Wormington said. “I took a big hit.”

Wormington was able to stay on his feet with funds from the recently completed hospital jobs along with money he had saved, but he is still feeling the effects.

He has cut his number of employees from eight last year down to two.

“I haven’t ever been this far down,” Wormington said.

Still, Wormington’s current predicament hasn’t altered his heart, something witnessed by 19-year-old Allen Isom, who was given an opportunity by Wormington to start a detailing business out of his shop.

“He’s got a good heart,” Isom said. “He cares about people.”

Wormington still finds ways to give back despite his financial hardship by donating money annually to local orphanages and schools.

He sees his contributions as a way to make an impact.

“If you grow up and you don’t have money, it should be a base and something to jump off to make you want more for your own self,” he said. “You say, ‘Hey, I grew up this way and I don’t my kids to grow up this way.’ It’s something you don’t want nobody to go through. So I figure if I can help a little, it’s worth it.”

And the financial strain hasn’t stopped Wormington from doing what he loves.

Wormington’s brother, Aubrey, stands along the back wall of the shop, shaking his head.

“It amazes me because he’s my little brother. I kind of praise him because he’s so good,” Aubrey said. “I’ve seen people he’s met and dealt with. I’m proud of him.”

Wormington insisted he has caught up enough to start thinking about his next project – an all-in-one car garage complete with window tinting, car restoration, car audio, truck accessories, oil changes, a mechanic’s shop and a paint and body shop.

“Anything you could think of doing to a car,” he said.

Whether that vision becomes a reality remains to be seen, but Wormington won’t give up.

“A lot of people down people who live in trailers,” he said. “Not everybody has the will and the might to want more for themselves. Being able to just deal with that kind of life, you’ve got to be strong. I’ve never gave up on anything.”