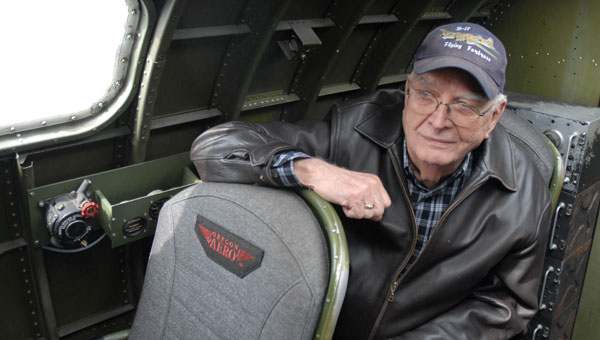 North Shelby resident Dr. John Hard, a WWII veteran, looks forward to the cockpit of a restored B-17 while in the air March 7. (Reporter Photo/Neal Wagner)

Hard, who was a first lieutenant during World War II, piloted one of the iconic planes during more trying times in the 1940s, and knew he owed the aircraft his life.

“During a mission to Hamburg, we came back with only two engines,” Hard said of the four-engine bomber. “After we landed and went back to our barracks, the flight crew counted over 100 flak and bullet holes in our plane.

“But we didn’t have a single injury. The plane was scrapped after that,” Hard added. “It was very scary, but it was what I went into the Air Force to do.”

Hard served in the Air Force from 1943 until just before his 21st birthday in 1945. During his combat deployment to Europe, Hard was stationed in England and piloted the B-17 over enemy territory 35 times.

“We flew 35 missions over Germany, and we didn’t have a single Purple Heart in our crew,” Hard said of the military medal awarded to those wounded or killed in combat.

“If you were going to get shot at, the B-17 was the place to be,” Hard added. “It could withstand enemy fire like no other.”

The Oklahoma-based Liberty Foundation gave Hard a chance to relive his hundreds of hours serving in the B-17 when it brought its newly restored “Liberty Belle” airplane to the Shelby County Airport. During the visit, the foundation took Hard on a 20-minute memory-filled trip over Shelby County.

“This B-17 was manufactured in August of ’45. It never saw combat,” said Bryan Wyatt with the Liberty Foundation. “After the war, it was sold as scrap to a mining company, and then it was purchased by Pratt and Whitney.”

Pratt and Whitney fitted the plane with an experimental turbo-prop engine, making it one of the few five-engine B-17s in existence.

After it was donated to the Connecticut Aeronautical Historic Society, the plane was damaged in a tornado and ultimately restored to flying condition by the Liberty Foundation in 2004.

Though the interior of the Liberty Belle was chilly during the March 7 flight, Hard told of much more extreme conditions during the war.

“I would wear long underwear, olive drab trousers and a shirt, an electric flight suit that was heated, a leather and wool flying suit, two pairs of gloves, a helmet, goggles and an oxygen mask,” Hard said.

“There wasn’t an inch of skin exposed, and it was still cold,” he added.

During the flight, Hard sat in the midsection of the aircraft, which would have housed the radio operator. The flight marked the first time Hard ever flew in anything but the cockpit of a B-17.

“I enjoyed every minute of it,” Hard said after the flight. “Most of the memories (of the war) are still pretty fresh.

“They have never made a better airplane,” Hard added. “It wasn’t the ease of flying it that made it so good. It was the fact that it brought you home.”