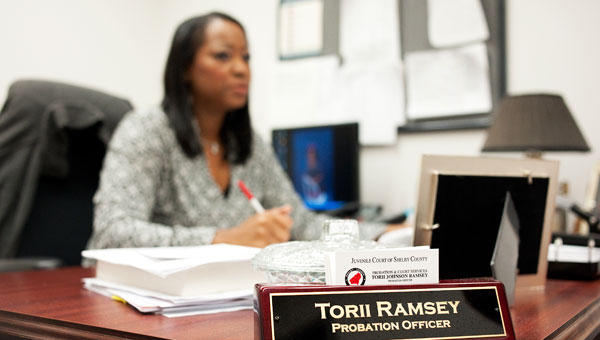 Probation Officer Torii Ramsey talks with a teenager in her office at the Shelby County Courthouse on Nov. 23. (Reporter Photo/Jon Goering)

John Miller folds his arms across his chest, props himself up against a wall in his colleague David Hall’s office and fixes his eyes on a spot across the room as he recounts a tormenting moment early in his career as a juvenile probation officer.

A kid, with a father in jail, was being ordered to return home to his mother who Miller knew to be a reckless drug addict. Miller said he’s never so adamantly disagreed with a judge’s decision, but that time he did, because he knew what the teenager was going home to face. It didn’t take but a minute for Miller and the judge to break into a fiery argument.

“We went behind closed doors and had a good shouting match,” Miller said. “The judge, she told me, ‘What you’ve got to do is not take it so personal.’ I looked at her and, I remember it like it was yesterday, said, ‘I take every one of these kids personal.'”

And Miller has for 28 years.

All of the probation officers in Shelby County’s Juvenile Probation office find themselves worrying about many of their cases as if the kids were their own flesh and blood, said Hall.

“One probation officer we have would drop her own kids off at school and then go pick up one of her teens and take him to the alternative school because his mother had no way to get him there,” Hall remembered.

With 15 staff members and an average of 500 cases at a given time, it’s easy to see how. Each probation officer carries about 60 cases; some more intensive than others.

Parents call authorities frantic when a child runs away from home. A school administrator emails a probation officer because a child missed 14 days of school in the past two months. Law enforcement officials arrest a 13-year-old for possession of marijuana.

So many pictures of troubled teens get painted in the juvenile office every day. But not all troubled kids are bad kids.

“I’d say 98 percent of the kids we see are good kids,” Hall said. “The majority of these kids are just making poor decisions.”

There are three types of cases that lead to the involvement of juvenile probation. These include dependency where there is an instance of physical, emotional or sexual abuse; delinquency in which a crime is committed such as vandalism or drug possession; and child in need of supervision or CHINS cases when a child is truant from school or beyond the control of a parent.

Miller and his team deal with all of these issues and more daily.

The trick is striking a balance. Officers must hold the kid accountable for their actions and ensure the community’s safety, all while upholding the best interest of the child.

And this can’t be done inside the walls of the courthouse.

Hall said home visits reveal much about a child’s behavior and the stressors that cause it.

Hall vividly remembers a surprise home visit he did years ago.

He said a knock on the door produced the young man he had been working with for just weeks. The teen was nervous and apprehensive about inviting Hall inside.

Once Hall stepped foot in the door he understood why.

“The home was like an episode of ‘Hoarders’,” Hall said. “There were newspapers and magazines sacked from the floor to the ceiling and just a pathway leading from the door inside the house.”

Hall said it’s important in his job to not be judgmental but to know how to discern what stressors at home could be affecting the child’s life. A filthy home or one without food in the cabinets does more to a child’s psyche than many might realize, he said.

“I think the toughest thing for me, early in my career especially, was gaining confidence with these kids. Most of these kids are really cynical about adults. Trusting adults is not high on their list,” Hall said.

In many cases, this apprehension to trust adults stems from abuse — physical or emotional.

He said this often complicates situations. You have to decipher who’s telling the truth, which can be more difficult than you might think, he said.

“To be successful in this job, you can’t do it individually,” Hall said. “You have to do it as a team.”

Hall isn’t simply referring to his internal team either.

The juvenile probation office must work in tandem with law enforcement, mental health professionals, the department of human resources, school administrators and parents.

Some cases take months. Other cases take years, sometimes even five or more.

She found her calling as a clerk in the juvenile probation office when she was just a teenager.

She finds difficulty in closing cases.

“I won’t let my cases go,” Rigney said. “I have a hard time with that. We all get so attached to different kids for different reasons.”

The attachment can lead to some of the most painful moments in a probation officer’s career.

All agree the hardest part comes with the death of kid.

“I guess those are some of the darkest times,” Hall said. “You begin doing a lot of soul searching and can’t help but think, ‘What if I could have done something.'”

All of the officers in Shelby County’s juvenile probation office have worked long enough to witness such a tragedy.

Hall said it’s almost as trying to watch a kid Hall has poured years of energy int, face a felony conviction. He said once they reach the age of 16 and commit such a crime, there is little more he can do for them.

The later is the reason Ryan Burroughs became a probation officer. He wants to steer kids away from life entrenched in crime.

“I always knew I wanted to do something that would allow me to work with kids and the community and help kids get passed all the things I saw people my age get into when I was younger,” Burroughs said.

There are rewards beyond measure in the job.

Burroughs said he took particular joy in the day-to-day interaction with the kids. Both Burroughs and Miller recently relished seeing two teens who formerly came through their office now accomplish major life goals. One young man spoke to students at the Shelby County School of Technology about life in the National Guard, while another dropped by the office with his mom to see Miller and thank him for where he is in his life today – a student at Southern Union Community College.

Hall said there’s not much more rewarding than seeing a kid that was such a thorn come back 10 years later with a new life.

“I knew it was an occupation where you’re not going to get wealthy but you become rich in so many other ways,” Hall said.