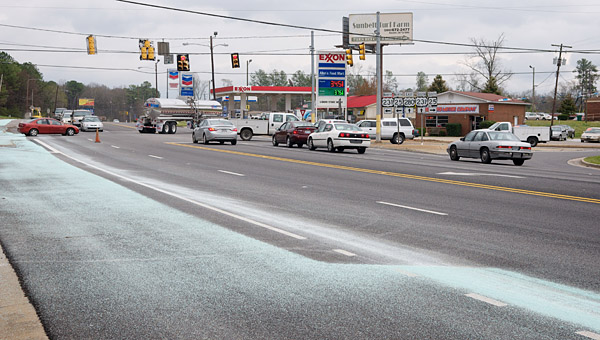 HARPERSVILLE – A green unknown substance trailed down U.S. 280’s westbound lane in Harpersville on the morning of March 10, causing lane closures and delays.

“Investigators from the Alabama Department of Environmental Management responded to the scene and advised on clean-up methods and potential hazards associated with the material,” according to the press release. “ADEM advised that the material must be kept out of the water stream to prevent a potentially large fish kill in local waterways.”

The clean up was undertaken and directed by the agricultural company that sold the material to the trucking company, Agrium Advanced Technologies of Sylacauga.

The Alabama Department of Transportation also responded and assisted in the clean up.

“I would like to thank ADEM, ALDOT and Agrium for their quick response and invaluable assistance in quickly and efficiently dealing with the spill and minimizing the environmental impact and the effect on traffic flow along 280,” Police Chief David Latimer stated in the press release.