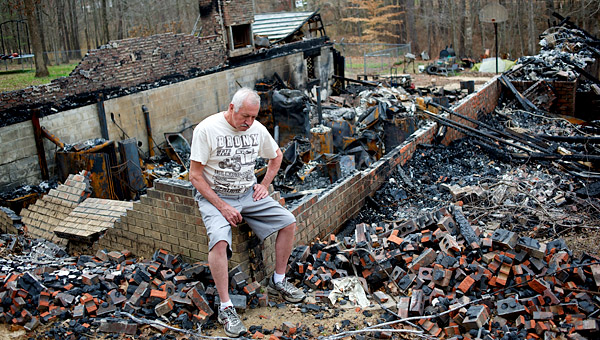 CHELSEA – Chelsea resident Ronald Shaw was in Selma when his house burned Feb. 12, but the testimony of his children and neighbors was enough to put him into action.

“On February 12, a Saturday night, about 11:30, my house caught on fire,” Shaw said. “My daughter called the fire department, and then went over to the neighbor’s. The fire department came out. I don’t know what they did, I wasn’t there.”

Shaw’s 43-year-old son, Mike Shaw, told his father the fire was started by a lamp in the far back corner of the house. Mike said he watched the Chelsea firefighters arrive and spray water on the trees and the grass, but not the house, Ronald Shaw said.

“There was no water on the house, just on the trees and grass,” Shaw said. “It wasn’t until the roof fell in they started putting water on it.”

Shaw arrived on the scene at 1:30 a.m. from Selma and said he saw a pumper truck from another fire department helping Chelsea.

“(The pumper truck) had a line in my pond next to my house,” Shaw said. “They were putting water on the house, they and Chelsea, but it was already caved in and burned up.” 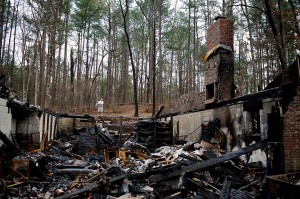 Ronald Shaw looks over the ruins of his house in Chelsea. (Reporter Photo/Jon Goering)

“Any time we have a structure fire in our area, we have an automatic aid agreement with Cahaba Valley or the closest neighboring department,” Shirley said. “We help them; they help us. That’s common, and had nothing to do with the water situation. That played no part in it.”

Shaw lives on Rich Drive in Chelsea, a dirt road a few miles from both Chelsea City Hall and the Chelsea Fire Department. As Rich Drive’s residents only have 1- to 2-inch water mains, the road cannot support fire hydrants, which need 6-inch water mains.

“There’s no fire hydrants out there because there’s not water to support hydrants out there,” Shirley said. “The initial crew had to use the water they had aboard their engine company. We were able to suck water out of the pond and feed the one out of the fire scene. We were drafting water from a nearby pond.

“There were a few minutes until the engine got set up to supply water. That’s inherent when there’s not supply in the area. I think the crew did a magnificent job finding another source of water,” Shirley added.

Shaw said he spoke with Shirley about why the department doesn’t have a pumper truck for locations where fire hydrants are unavailable.

“I want a fire hydrant,” Shaw said. “They can’t put one in because they don’t have a line big enough. I guess we’re just vulnerable.”

Chelsea Mayor Earl Niven said Chelsea has a total of 160 fire hydrants throughout the city limits.

“We can only put hydrants where there is 6-inch water lines,” Niven said. “Those people down Rich Drive have individual 1- or 2-inch lines to their homes.”

“We put fire hydrants every place in the city of Chelsea that could support them. The homeowners can go in together and put in a 6-inch line,” Niven added. “I don’t think the water department would do it. It would be up to Shelby County.”

Shirley worked with the mayor two years ago to improve the fire hydrant situation in the city.

“Chelsea did something I’m not familiar with anyone else doing. The mayor had me identify everywhere there were water mains big enough for fire hydrants, and the city paid for it,” Shirley said. “I was extremely proud the city made it a high enough priority to make the change. I’d love to have fire hydrants everywhere, but that’s not economically sound.”

After Shaw’s home burned in February, a neighboring trailer belonging to Lavoy Rich burned “to the ground” March 6, Shaw said.

“That’s two in the same neighborhood. The city won’t do anything to improve the road, and they won’t put fire hydrants in,” Shaw said. “What are we to do? Our insurance will go up. They won’t improve our road, but they went to (repair) a road past (Shelby County) 11, and we’ve been asking long before they asked. They mayor says ‘next year’ or ‘I don’t have the money.’ I don’t know what we can do.”

The mayor said the condition of the road had nothing to do with the fire incidents.

“The road had nothing to do with it,” Niven said. “We had fire trucks in there. It was just a matter of not having a fire hydrant.

“We have mutual aids. We have three fire trucks, and those trucks are loaded,” Niven said. “We go to a fire hydrant and fill up. We have mutual aid with Cahaba Valley and with other fire departments to come and aid. That’s what happened (March 6) with (Shaw’s) neighbor’s house. We had fire trucks there, and mutual aid bringing pumpers in. When a fire starts in a house trailer, it goes up in a hurry.”

Shirley also said the road conditions did not hinder the fire trucks from reaching the scene.

“The roads were not a problem for us getting in there to the fire,” Shirley said. “The roads are dirt roads and narrow, but it did not slow our engine response in getting to the fire.”

“I’m going to rebuild, but we need protection,” Shaw said. “That’s going to cause the whole city’s insurance rate to go up. Why did they put fire hydrants on (Shelby County) 47? There’s no houses, just woods. Why improve the outskirts first, not the city itself? A city ought to be able to do more than what they’re doing.”