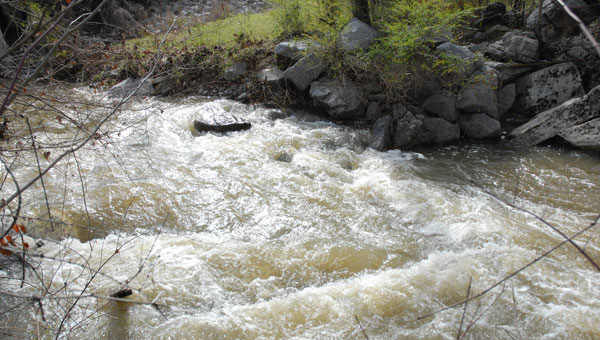 Water levels were higher than normal March 15 at Buck Creek in Pelham the morning afer a heavy rainfall caused flooding problems in some parts of the city. (Reporter Photo/Neal Wagner)

Parts of Shelby County have seen more than 4 inches of rain above normal this month, causing some flooding problems for cities and driving hazards for motorists.

According to the National Weather Service in Calera, central Shelby County has seen a little more than 7 inches of rain so far this month.

Because the NWS’ nearest historical weather records site is in Birmingham, NWS meteorologist Jessica Talley said she could not tell exactly how this month’s Shelby County rainfall totals compare to the monthly average.

However, Birmingham’s rainfall was about 4.1 inches above normal value midway through March, which is likely about the same amount in Shelby County, she said.

“There’s usually not that much difference between Birmingham and Shelby County,” Talley said.

By the end of the month, the rainfall amount could change depending on the weather situation over the next few weeks.

“We are only half-way through March, and this is the last significant rainfall we are seeing over the next seven days,” Talley said March 15. “Our diversion from the normal amount of rainfall could change by the end of the month.”

The higher-than-normal March rainfall has resulted in a busy month for the Pelham Public Works Department.

The seemingly constant rainfall has not caused any catastrophic damage in the city, but it has lead to some driving concerns and rapidly rising bodies of water.

“We have been lucky in that regard,” Pelham Public Works Director Eddy Jowers said of flooding in the city. “Right now, we are in good shape.”

Because Buck Creek and several other smaller bodies of water dot Pelham’s map, the city is prone to flooding during prolonged heavy rains. But March so far has been a sort of best-case scenario for the city, Jowers said.

“It’s rained a lot, but it’s been spread out enough that the water will rise and then start receding within a few hours,” Jowers said. “But our culverts and all were running pretty well full-bore. If the rain had kept going much longer, it would have really been a problem.”

Long periods of heavy rains can cause the Cahaba River to rise, which affects its tributaries such as Buck Creek, Jowers said.

“When it gets really bad is when the (Cahaba) river fills up,” Jowers said. “The water (in Buck Creek) has nowhere to go.”

Pelham’s only major March flooding problems came on State Park Road, which leads from Alabama 119 to Oak Mountain State Park, and on Creekview Drive in the Crosscreek subdivision.

“State Park Road is really the Department of Conservation’s road. Something needs to be done about that,” Jowers said. “It used to just be an access road for the park, and now it’s a main thoroughfare.”

Women of distinction to be honored