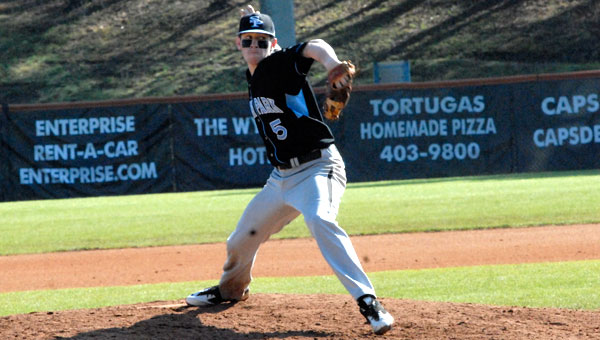 The Jaguars tried to string together back-to-back tournament championships March 17.

Spain Park edged Tuscaloosa County 7-6 in the quarterfinals in a morning game before coming up short in a 10-3 loss to Houston High School of Germantown, Tenn., in the semifinals in the afternoon.

The Jaguars, trailing by two runs, had runners on first and second in the top of the sixth inning before a double play ended the scoring threat. Houston responded with seven runs to clinch the victory in the bottom half of the inning.

“(Houston) is very similar to the good teams around here,” said Spain Park coach Will Smith. “You can’t give them any extra outs.”

Spain Park junior outfielder Paul Angel provided a few highlights for the Jaguars on the final day of the tournament. Angel, who came to Spain Park from rival Oak Mountain during the offseason, led off each game with a solo home run.

“He’s a top-level player,” Smith said. “We’ve got to get some of the guys swinging behind him.”

Angel finished 1-for-4 with an RBI and a run scored in the loss to Houston.

Marks Abernathy led the Jaguars at the plate as he went 2-for-3 with a run scored.

Alex Close started on the mound and took the loss after giving up five runs, including three earned runs, on five hits with four strikeouts and three walks in 3 2/3 innings.

Freeman allowed five runs, including two earned runs, on three hits with seven strikeouts and a walk in 2 1/3 innings in relief.

Spain Park took a 1-0 lead in the top of the first inning after Angel’s solo homer.

Houston responded with three runs in the bottom of the first to take a 3-1 lead.

The Jaguars cut the lead to 3-2 in the top of the second inning. Abernathy lined a double to center field before scoring on an RBI single by Brock.

Houston added a single run in each of the third and fourth innings to push its lead to 5-2. The Jaguars cut the deficit to 5-3 in the top of the fifth inning. Carter White singled to center field before scoring on a sacrifice fly RBI by Alex Close.

Abernathy and McPherson reach on back-to-back singles to start the top of the sixth inning. However, Abernathy was picked off and Brock grounded into a double play to end the inning.

Houston scored five runs in the bottom of the sixth inning, including a two-run homer, to clinch the win.

Spain Park advanced to the semifinals following a 7-6 win over Tuscaloosa County in a rematch of a first-round series in the Alabama High School Athletic Association Class 6A playoffs a year ago.

Spain Park broke a 6-6 tie with a run in the bottom of the sixth inning to clinch the win.

Angel led the Jaguars at the plate as he finished 3-for-3 with an RBI and three runs scored.

Freeman picked up the win in relief after giving up one earned run on one hit with a strikeout in 1 2/3 innings.

Mikey White started on the mound and gave up three earned runs on seven hits with four strikeouts and a walk in five innings. Dustin Cowart allowed two earned runs on two hits in 1/3 of an inning in relief.

Angel blasted a solo homer to right field in his first at-bat to give the Jaguars a 1-0 lead following the first inning.

Tuscaloosa County responded with a single run in each of the second and third innings to temporarily take a 2-1 lead.

The Jaguars responded with two runs in the bottom of the third inning to take a 3-2 lead. Angel reached on a walk to start the inning before scoring on an RBI single by Alex Close. Carter White, who reached on a bunt single, scored on a sacrifice fly RBI by Josh Close.

Tuscaloosa County scored a run in the top of the fourth inning before Spain Park responded with a run in the bottom half of the inning to take a 4-3 lead. Brock lined a double to left field before scoring on an RBI single by Hall.

Tuscaloosa County scored three runs to tie the game at 6-6 in the top of the sixth inning before Spain Park clinched the win with a run in the bottom half of the inning. Angel lined a triple to the right-center field gap before scoring on a sacrifice fly RBI by Carter White.

Freeman sandwiched a strikeout between two fly ball outs in the of the seventh inning to end the game.

The Jaguars have played 14 games in a span of 10 days between the Birmingham Metro tournament and Buccaneer Classic. Spain Park players have the next three days off.

“It is a much-needed three-day break,” Smith said.