Pilgrims gather at Caritas for retreat 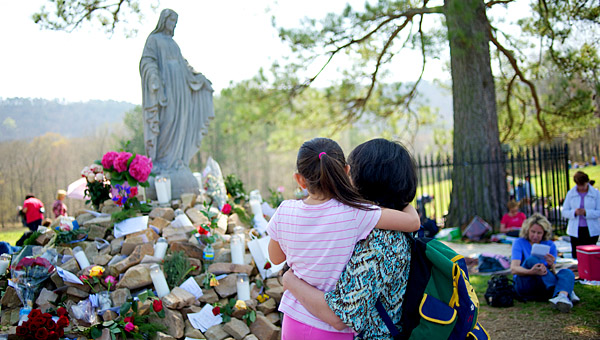 A mother and daughter share a moment in front of a statue of St. Mary following a Rosary in the Field on March 20. (Reporter Photo/Jon Goering)

STERRETT – The hills of Sterrett echoed as more than a thousand believers spoke adorations and petitions in unison from Caritas of Birmingham.

The believers’ cars lined miles of Shelby County 43, most bearing license plates from states other than Alabama. People made pilgrimages to Caritas from Ohio to Ontario and from Florida to Illinois. The reason for the pilgrimages were varied, but the intents were the same. The people wanted to hear from the Virgin Mary through Marija Lunetti.

Lunetti says she has seen apparitions of Mary, or “Our Lady,” since she was a child living in Medjugorje of Bosnia-Herzegovina.

In 1988, Lunetti visited Alabama and stayed with the founders, Terry Colafrancesco and his family, as she waited to donate a kidney to her brother. The apparitions of Mary continued through her stay with the Colafrancesco family, and she said Mary desired to begin the Caritas community, according to the Caritas website. After that time, Lunetti has made many visits to the community. 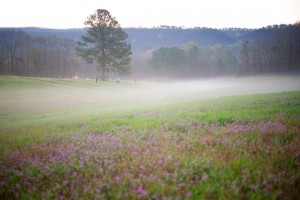 A handful of worshippers gather around the statue of St. Mary during a foggy, early morning prayer in the field at the Caritas of Birmingham. (Reporter Photo/Jon Goering)

In past years, Lunetti has visited in July, but she moved her most  recent visit to March 19-23.

“Maria told us she’d like to come out this past July but it didn’t work out for her because she had things going on in Medjugorje,” organizer Ruth McDonald said.

As the community was adding onto its tabernacle, Colafranesco was pleased Lunetti chose March to visit, McDonald said.

“Our founder was looking forward to having her here to bless the building,” McDonald said. “We believe it was arranged by God. We want to dedicate the new addition to God and to Our Lady to be used for whatever needs to bring conversions.” 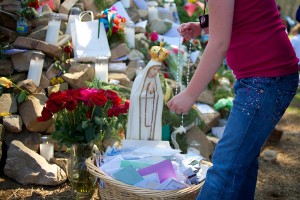 A young worshiper goes to hang a rosary on a small statue of St. Mary. (Reporter Photo/Jon Goering)

Each time Lunetti visits, many flock to the site.

Two college students, Judy Schultz and Colleen Stevenson, spent the last weekend of their spring break from their college in Steubenville, OH to see Lunetti.

“I’m a new Catholic,” Schultz said, “so I wanted to see Our Lady. In my mind, I saw some images of her. I feel she will give me graces.”

“While I was in mass, I had a mental image of Mary picking yellow flowers,” she said as she pulled out a child’s drawing. “When I opened my eyes, I saw the little girl next to me was drawing a picture of a woman surrounded by flowers. The little girl gave me the picture.” 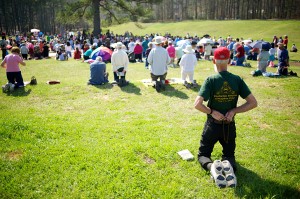 Worshipers kneel in prayer during a Rosary in the Field on the morning of March 20. (Reporter Photo/Jon Goering)

Stevenson said she hopes to share her experiences with her fellow college students.

“I want to pass along the blessing we’ve received here to other students,” she said. “We just decided to come for the tail end of spring break.”

Merle King and his wife of Springfield, Ill., returned to Caritas this March for a second pilgrimage.

“We were here 9 years ago,” King said. “This is a kind of second pilgrimage, and we went to Medjugorje in 2001. It’s a time for spiritual growth. We use Mary’s ministry to draw closer to Jesus. We come down here for a retreat.” 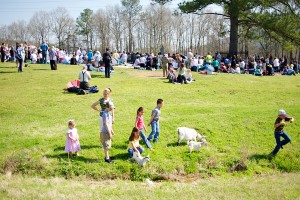 Children play with goats wandering the field while the adults pray during a morning Rosary in the Field. (Reporter Photo/Jon Goering)

” It was simple people seeing Mary in Medjugorje; they weren’t educated,” King said. “When I see people who are not educated experiencing something like this, I think it may be something.”