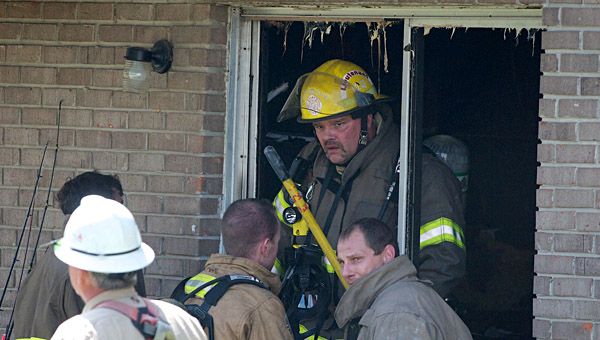 Firefighters with the Columbiana Fire Department work on a single unit apartment fire at the Town Creek Apartments in Columbiana on March 23. (Reporter Photo/Jon Goering)

COLUMBIANA – Grease left unattended on a stove led to the total loss of an apartment unit March 23 at the Town Creek Apartment complex, located on Alabama 70 just west of the Alabama 25 intersection.

There were no injuries in the afternoon fire.

Twelve firemen, two pumpers and a ladder truck from the Columbiana Fire Department responded to the scene at 12:12 p.m., along with the Columbiana Police Department, Southeast Shelby Rescue and an RPS ambulance.

Firemen had the blaze under control within 10 minutes and were on the scene for an hour. The apartment unit suffered heavy fire and smoke damage.