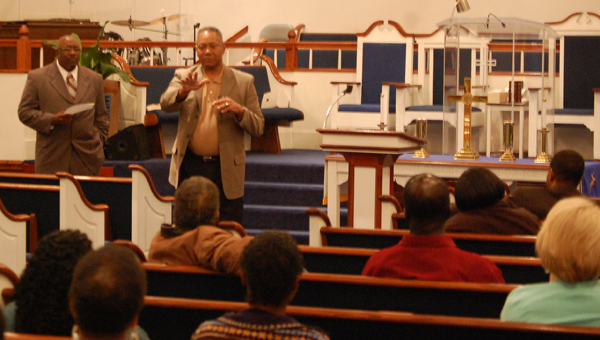 ALABASTER – Thompson High School should consider hiring a minority applicant as its next principal, a former city councilman and longtime educator said March 24.

Bobby Lee Harris also told a gathering of about 35 people at Liberty Baptist Church that the school’s recently hired head football coach was less qualified than minority candidates who applied for the position.

Harris made his comments at a community meeting co-organized by Liberty’s pastor, Dr. A. Simmons. The meeting, they said, was the first step in organizing the city’s black community to address what they said were issues within the city – the school system, specifically.

Harris called the Shelby County School System “one of the best systems in America.” In its search for a new Thompson principal, Harris said the individual likely will come from outside the school, though it should promote from within.

The ideal candidate would be one of Thompson’s current assistant principals, one of whom is black, Harris said.

“That’s what this group here needs to do tonight – decide who is going to go to her and say, ‘would you consider applying for the job?'” Harris said.

Harris said he has not spoken to the assistant principal. He said he has “called all over the state of Alabama” to encourage minority educators he knows to apply for the job.

“We know there are going to be some candidates,” said Harris.

Harris was the Ward 1 councilman for 12 consecutive years, ending in 2004. He spent 26 years as an educator in the Shelby County School system, which he sued twice.

Harris was an assistant principal at THS for 11 of his 14 years there. He applied for the principal position and, when he didn’t get it, sued the school system and lost.

When Thompson’s became the first available, he spent three weeks as principal before leaving for personal reasons, which included threats against him, he said. He then became the principal at Shelby County School of Technology.

He said the “same process that they used against me years ago” will be used in Thompson’s current search. According to him, the process includes candidates being interviewed by a group of parents, who then select who they want as principal and suggest that person to the school system’s superintendent.

The superintendent then recommends that person to the school board, Harris said.

There has never been a black head football coach at a Shelby County high school, Harris said.

Thompson, he said, had a chance to hire one during its recent search for a new head coach.

“The new coach that is coming in is not the most qualified coach,” Harris said.

Two black coaches who applied were more qualified, Pastor Simmons said. One played in the National Football League, while the other coached in the Southeastern Conference and is a current teacher and assistant football coach at the school, he said.

A group of parents interviewed all the coaching candidates, he said. The boosters then took their choice for head coach to the superintendent.

Pastor Simmons said “you have to wonder if there was some other agenda” behind passing on the minority applicants.

Added Harris: “What we’re asking the school system to do is to open it up to everybody.”

Harris said the city of Alabaster is considering an ordinance to limit the number of vehicles one can have on his or her property. The city, Harris alleged, claims fire trucks and other emergency vehicles are having issues traveling along streets due to the number of parked cars.

“Many Hispanics have what they call extended families living in a house,” Harris said.

“We need to be aware, because it may not affect you today, but it can affect you tomorrow,” Harris said. “If you can’t park but so many cars in these folks’ yard, it’s going to trickle on down and they’re going to tell you how many to put in your yard. Then it’s too late.”

If the city is focusing on Hispanics, Simmons said, it could next turn its attention on the black community.

“We need to know what’s going on and why it’s going on, so we as citizens can address it,” Simmons added.

Harris and Simmons said they invited school system officials and Alabaster city officials to the meeting, which was held during the Alabaster City Council meeting, and told them in advance what would be discussed.

Ward 1 Councilwoman Sophie Martin arrived at the church after the city council meeting.

“I think it’s important to have community meetings to bring these things of concern to the forefront,” Martin said. “I do realize that a lot of your concern is with the school board, but if there’s anything that I can do on the city end, please feel free to contact me and I’ll be happy to do that.

“I thank all of you for coming. That’s what we need – we do need input from the community and the residents, because without that it’s not going to go anywhere.”