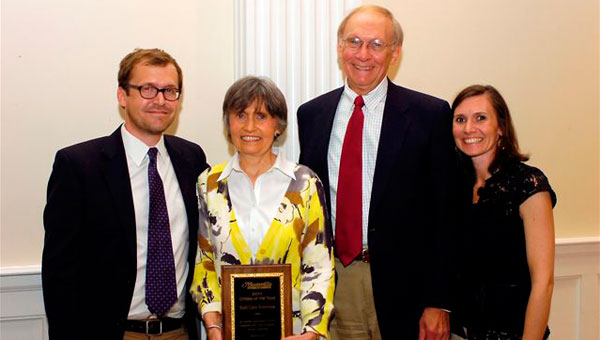 Ruth Robertson and her husband, Ed, are surrounded by their children, Cam Robertson and Renee Corley, as Ruth proudly holds her Citizen of the Year award. (Contributed/Matt Orton)

Master of Ceremonies “Dollar” Bill Lawson introduced proud principals, club presidents and an assortment of other leaders to bestow awards and recognition on those who best serve the community of Montevallo.

“It’s wonderful that we can gather together and recognize good works in the community,” Lawson said. “It’s a wonderful thing that happens in our community every year. So few communities take the time to do this.”

Annie McClain, principal of Montevallo Elementary School (MES), said it takes a special person to be a kindergarten teacher as she announced Kim Gray as MES’s Teacher of the Year.

McClain also had the opportunity to present a student award to fifth-grader Jessie Evans, a student at MES.

“Jessie is the star of Montevallo Elementary’s fifth grade,” McClain said. “Jessie is OK being told, ‘You think you know it all.’ I like that.”

Shellie Ritch, an assistant principal with Montevallo Middle School, took the stage to present an award to Sheila Fields.

“Sheila is my right hand,” Rich said. “She’s the backbone of Montevallo Middle, and has dedicated her life to those kids. She’s their biggest cheerleader and supporter.”

Ritch proceeded to award eighth-grade math teacher Tamika Whitt with the Teacher of the Year award for the middle school.

Derek Dearman, principal of Montevallo High School, presented the student citizenship award to Maggie Oswald. He then awarded Mary Howard with the Teacher of the Year honor.

Earl Cunningham, president of the Montevallo Civitan Club, presented the Citivan Citizen of the Year award to Freda Shivers, citing her starting Montevallo’s chapter of the Boys and Girls Club as a great accomplishment.

“She is Montevallo,” Buff said.

Karen Pendleton of Shelby Emergency Assistance presented a Volunteer of the Year award to the University of Montevallo’s Lambda Chi Alpha fraternity for its assistance in donating 28,000 pounds of food to the program.

Joe Williams of Montevallo’s Boys and Girls Club presented awards to Xan Shivers and Steven Gilbert for their proactive efforts in leadership.

“They stepped into the community with all their hearts and made substantial contributions to their community,” Stewart said of the Fulmers.

Mary Lou Williams wrapped up the awards ceremony by bestowing the prestigious Citizen of the Year award to Ruth Robertson.

“She’s invested herself in her community as a volunteer,” Williams said of Robertson. “Her personal faithfulness to friends and acquaintances goes beyond what would even occur to most of us.

“Ruth has great personal faith,” Williams said, “and unselfishly lives to make the world around her a better place.”

Robertson took her place at the podium and spoke of her amazement with the community.

“When I moved to Montevallo, I was amazed at the amount of time and resources Montevallo citizens gave to make it a better place,” she said. “I hope to be a better citizen each day and help somebody have a better day.”