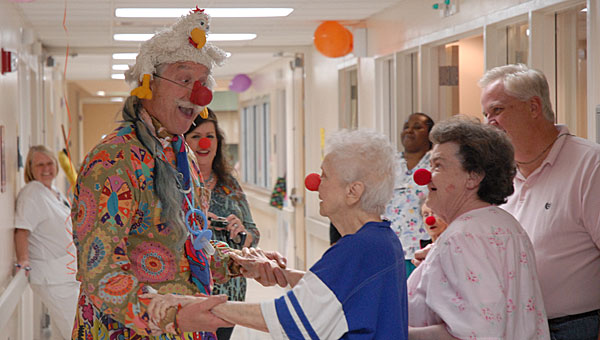 Shelby Ridge Nursing Home and Rehab Select resident Katheriene Chappelle could not contain her laughter as she attached a pair of red foam clown noses to her fingers.

“This nose keeps coming off. It’s too big for my nose, and now I have ended up like this,” Chappelle said as she chatted with her friends in Shelby Ridge’s community room.

“I hugged a clown today. See, I got the sticker to prove it,” Chappelle added, pointing to a heart-shaped sticker on her shirt.

Many of Chappelle’s friends at Shelby Ridge shared her joy March 30, as a nationally known doctor visited nearly every room in the building.

Dr. Hunter “Patch” Adams and about a dozen clowns visited the nursing home for about an hour, after Shelby Ridge won an essay contest challenging nursing homes to share what was unique about their facility.

Shelby Ridge Director of Admissions DiAnna Wilson and Shelby Ridge resident Patricia Bradberry wrote the winning essay, which described the multitude of activities available to the facility’s residents and the sense of family among the staff and the residents.

“I just sat down and started writing,” Bradberry said, noting she heard about the essay contest when she stopped to chat with DiAnna. “And the essay we wrote ended up winning the whole thing.”

As a reward for Shelby Ridge’s essay, Adams and his fellow clowns filled the building with balloons, stickers and red foam clown noses.

During his visit, Adams, dressed in a brightly colored robe, a giant pacifier and a chicken hat, danced with residents in the hallway, brought smiles to the faces of residents in the Alzheimer’s ward and hugged nearly everyone in the building.

Residents at Shelby Ridge spent the days leading up to Adams’ visit watching the movie “Patch Adams,” which starred Robin Williams and is based on Adams’ life.

“This is important to their quality of life,” said Shelby Ridge Activity Director Jonisah Walker. “They all watched the movie to get ready for his visit, and some of them were crying because it really touched them.”

Shelby Ridge Owner Chris Schmidt said he was proud of Bradberry and Wilson for winning the essay contest, and said he was glad Shelby Ridge’s residents got the chance to meet the nationally known doctor.

“After he (Adams) read the essay, he wanted to come here and see what we were all about,” Schmidt said. “We are honored to have Patch come and visit with us and experience something very special.”

Inverness clubhouse named one of best

The Inverness Country Club clubhouse, shown here from the outside, was recently named Golf Inc. magazine's New Clubhouse of the... read more