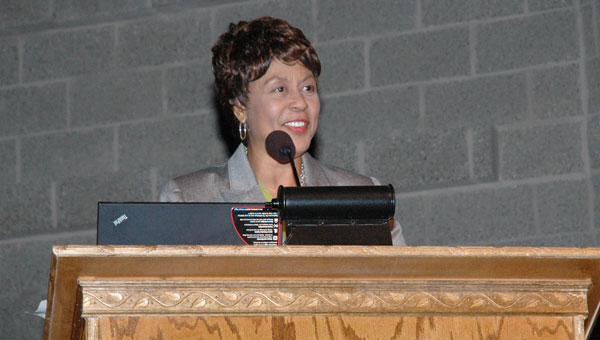 INDIAN SPRINGS – Carolyn McKinstry spoke with her four close friends only minutes before they were killed in the Sixteenth Street Church bombing September 15, 1963. On April 1, McKinstry shared her story of forgiveness and reconciliation with the students of Indian Springs School for its day of service.

A Clanton native, McKinstry, now 63, was 14 years old when she survived the church bombing. She said she always had parental permission to attend church events because they were “wholesome activities” and a “very fun place to be.”

“The church had its own history,” she said. “It was the first black church built in Birmingham, Alabama. Anyone who was anybody in the black community would come to the church when they visited Birmingham.”

McKinstry attended the first mass meeting of Dr. Martin Luther King Jr.’s marches, and joined approximately 5,000 citizens ranging from 8-80 years old as they marched through Birmingham. The marchers were met by policemen with police dogs and billy clubs, along with firemen with fire hoses, she said.

“Being hit with a water hose, it of course gets you wet and messes up your hair, which I was concerned about, but it was a very painful experience,” she said.

She said regular bombings began in 1948, so bombings were a regular occurrence in her young life.

“Bombing for me was a way of life,” she said. “It was that way for black families, homes, businesses and churches.”

After surviving the Sixteenth Street Church bombing, McKinstry struggled in dealing with the ordeal.

After she graduated from college, McKinstry began to travel and tell her story, focusing on love, forgiveness and reconciliation. She said she gave her testimony in the hope people would one day figure out a way to live together, next door to each other.