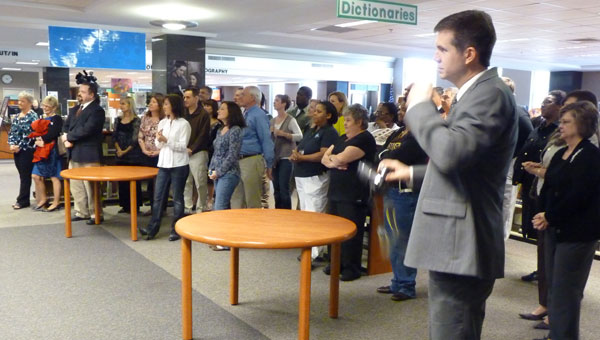 The school opened in 2001. There are 25 staff members who were there the first day and still work at Spain Park today, said Principal Chris Shaw.

Shaw, who grew up in Homewood, said he can remember when workers were building Spain Park.

“News travels fast,” he said. “Spain Park was impressive, and it is impressive to this day.”

Current Hoover Assistant Superintendent for Instruction Ron Dodson, who was formerly an assistant principal at Spain Park, said he felt Spain Park has succeeded because of an attitude open to learning and open to making mistakes.

Current Homewood City Schools Superintendent Dr. Bill Cleveland, who was an assistant principal at Spain Park from 2001-2004, shared some humorous experiences from his days at the school and talked about why Spain Park has been so successful.

“The greatest thing is the commitment everybody had. When tough times came up, everybody just responded together,” he said. “There was an enormous amount of pride, and I think that still exists today.”