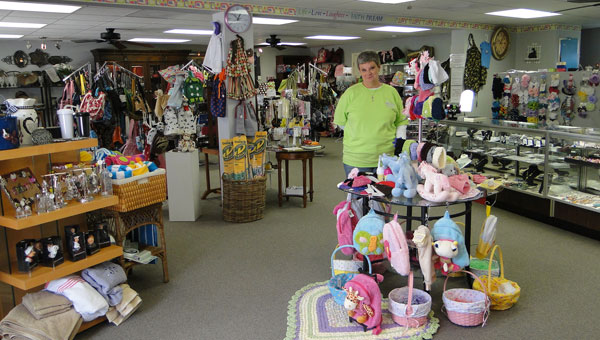 Pat Huffman, store manager, talked of how she and her aunt, Barbara Winborne, relocated the business that began in Pontotoc, Miss.

“Aunt Barbara began the business in her home in Pontotoc with hand-poured candles in 2004. My mother — her sister — moved from Tupelo, where I was raised, to Columbiana in 2005. Aunt Barbara would drive over to visit her. My husband, Rick, and I moved from Hoover to Calera in 2001.

“In December of 2008, Aunt Barbara decided to move her business to Calera. We opened for business in a single unit at the other end of this shopping center. By July 2009, we needed a double unit and moved just a few doors down to where we are currently located.”

Because of health issues, Winborne is now unable to leave Pontotoc. Huffman depends on her husband to help run the store. She reminisced how they met in South Padre, Texas.

“Aunt Barbara was living there because of her husband’s job. There was a bike rally, and I told a friend who was walking on the island with me that I was going to ride a Harley. My soon-to-be husband, driving a Blazer, stopped to talk. I let him know in a hurry I was only interested in riding a bike. He left, but it wasn’t long before he returned on a Harley. He moved to Hoover in 1998. The rest is history.”

Huffman never tires of learning new things. It only took her a couple of weeks to learn how to use the embroidery machine.

“I’ve always enjoyed arts and crafts. In high school I took art and home economics so all of this is second nature for me,” Huffman said.

Monogram services are available for items purchased or brought in. Huffman also specializes in cakes for birthdays, baby showers and other occasions — no weddings.

The store, located in the shopping center behind the Calera Post Office, is open Tuesday throguh Friday 10 a.m.-6 p.m. With the exception of summer when fishing with her husband, Saturday store hours are 9 a.m.-1 p.m. Visit them on the web at Barbarascandles.com or contact by phone at 668-0909.

Jerry Sharp with the Cessna 172, a workhorse for the Civil Air Patrol for many years. (Contributed) By MOLLIE BROWN... read more