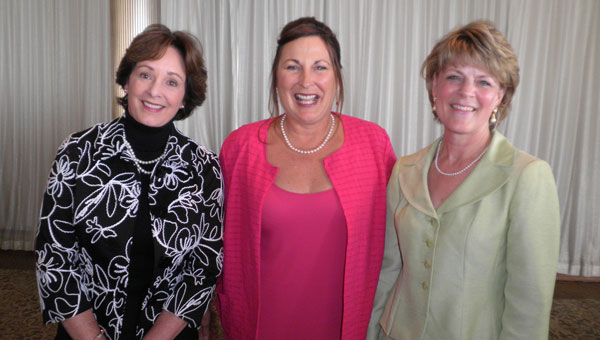 The Grand Ballroom of The Club was filled with distinctive honorees and guests at the 2011 Southern Women of Distinction Benefit Luncheon sponsored by the Southern Women’s Committee of Fifty.

The Lovelady Center and the Community of Hope were the non-profits selected this year.

The Lovelady Center is a 24/7 home for women, recently released from prison, and their children where they can live together and gain skills to live independently. Brenda Spahn, director of the Lovelady Center, spoke of the tremendous growth in the last six years. From six women living in Spahn’s home to 377 women and 115 children residing in the renovated East End Memorial Hospital, Lovelady is an example that one woman can make a difference to change lives.

The Community of Hope is a free health clinic in Shelby County for persons with no medical insurance. Executive Director Chris Monceret spoke of the volunteer doctors, nurses, dentists and ophthalmologists who give of their time one night a week to the sick. Hope is the only medical mission in Shelby County.

Anderson introduced both Barnes and Buffett who spoke of their careers and philanthropies. Secretary of State Beth Chapman introduced her friend, Justice Smith, who also spoke of her career as one of the longest serving judges in Shelby County.