Three men lay dead after a bar-room brawl that erupted in Old Town over the weekend of April 2.

The altercation occurred during a poker game in which accusations of cheating broke out between R.C. Moon and Pinchony Creek. After Sheriff Bird, who had previously been a part of the foursome at the poker table, left the bar room, the argument escalated, with Moon drawing his pistol and fatally shooting Creek. Dead Horse Phil, the fourth player at the table, then drew his gun and shot Moon.

Sheriff Bird arrived back on the scene after hearing shots, and then pulled his trigger on Dead Horse. The incident was witnessed by several townspeople drawn to the scene by the sound of gunfire and peeking through the saloon door.

Not long afterward, Sweet Scarlett stopped by the saloon, and it is rumored that her earlier appearance might have proved the necessary distraction that would have given tempers time to cool. (The above, boys and girls, was a staged reenactment that you should never try at home.) 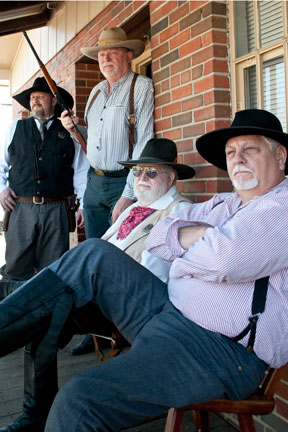 After the scene was cleared, Steve Norris and Joe Casey struck up their instruments for a few tunes. Onlookers returned to browsing and shopping among the vendors who set up for Wild West Trade Days, a monthly market event that will be held each first Saturday through October. Ron Holly, aka Major Dundee, began the 2011 version of Wild West Trade Days that was last held in 1999.

Some of the vendors from this first week’s event included painter Noble Alley, who specializes in folk portraits of your homestead and landscape painter Trish Benedict.

Larry and Diana Carby of Bluegrass Cabochons & Jewelry displayed pendants of polished jasper stones, each with its own unique natural markings.

Several vendors displayed assortments of trash and treasures — vintage and collectible items including games, toys and books, lamps and pottery and shabby chic furniture. Also seen were handmade soaps, colorful totes and accessories and girlie bows. Casual Closet from Pelham had stacks of QVC shoes for men and women priced at $25 for one pair or $40 for two.

Ron Holly said “We had beautiful weather this first Saturday — the cowboy re-enactors were great, as was the music — and as word gets around, we hope more people will mosey on down.”

Spaces for 50-plus vendors are available. To receive a vendor application, contact Ron Holly at 410-4496.

By LAURA BROOKHART / Community Columnist Though we awake as a new creature each morning, sometimes the changes are so... read more