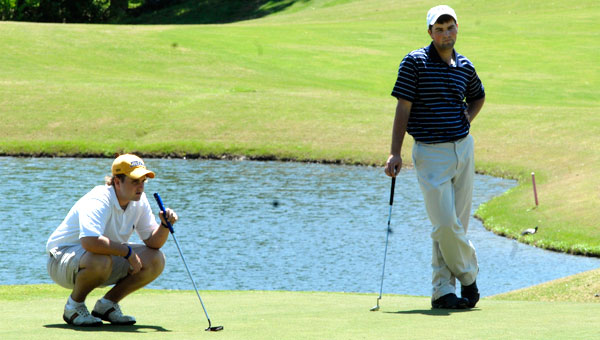 Brown expected to win the 2010 tournament with a couple of experienced seniors on the team. Brown didn’t expect the same result with a junior, sophomore, freshman, eighth-grader and seventh-grader making up his team in 2011.

Led by a pair of 1-over par 72 rounds from Trevor Page and Connor Smith, the Lions took home the championship trophy for the second year in a row following a team score of 299, which edged second-place Chelsea by four strokes. Smith and Page finished in a three-way tie with Connor Slane of Pelham for second overall in the individual standings.

“We’ve been a little erratic,” Brown said. “It really came together today. We really had a great day.”

Chelsea junior Jesse Goss captured his first Shelby County tournament individual championship with his round of even par 71, which marked his lowest round of the season.

Goss, who had two birdies during his round Tuesday, said his short game helped him limit his strokes.

“He’s pretty pumped about it,” Beasley said. “He ought to be. That’s a quality round here.”

Calera came in sixth in team standings behind McGaughty’s 15-over par 86.

Eddie Davis of Montevallo, Braxton Holley of Pelham and John Hayden of Briarwood Christian were also named to the all-tournament team.

Brown said the tournament will help the Lions when they return to Timberline Golf Club for an Alabama High School Athletic Association Class 5A section tournament later this month.

“This will give us a little bit of cofidence coming back here,” Brown said.

Complete team and individual results are listed below.